A University of Ottawa team has identified a small group of chemotherapy drugs that could serve as a possible Ebola treatment. The drugs interfere with a pathway the virus uses to hijack cells.

Ebola and its fellow filoviruses  are viper-like viruses that can cause brutal, deadly infections, which make coronaviruses and influenza look cuddly by comparison — we’re talking death rates as high as 90% in some outbreaks, with the virus killing half of those it infects on average.

The sheer lethality of the virus — and the shocking scope of a previous outbreak in West Africa — makes Ebola prevention and therapies a public health priority.

Ebola is pretty simple, as viruses go, University of Manitoba assistant professor of vial pathogenesis Jason Kindrachuk, who was not involved in the study, says. “But they’re able to impart these devastating diseases that I think we’re only beginning to fully understand the complexity of.”

A key part of the picture researchers are starting to fill in is understanding what Ebola is doing in the early stages of infection. There is a grace period, between infection and symptoms, where people show no signs of the virus, a window allowing it to potentially be spread.

What researchers do know is that, once inside, Ebola utilizes a nasty trick to get around.

As the team put it in their press release, Ebola is a master of disguise, masquerading as a cell that has died of natural causes.

“It’s cloaking itself in a lipid that is normally not exposed at the surface of a cell. It’s only exposed when the cell is undergoing apoptosis (natural cell death),” Marceline Côté, associate professor in the department of Biochemistry, Microbiology and Immunology in the Faculty of Medicine, said in the release.

Cloaked in its fatty costume, the Ebola virus is then scooped up by immune system cells — which carry it to organs across the body thinking it is cellular flotsam to be recycled.

Once there, the virus begins to replicate and wreak havoc: a multi-system assault of aches, fevers, organ damage, and (its most famous pathology) internal and external bleeding.

Half of patients will never recover.

But if that step, between delivery and attack, can be interrupted, it could be an effective Ebola treatment.

When the Ebola virus enters the cell, it needs to find a specific protein receptor inside the cell — think a lock for Ebola’s key. Once it does, it turns the key and the process of replication can begin.

To make the initial experiment safer and easier, Côté’s team tested Ebola surrogates (rather than real Ebola) against an array of drugs in the lab, looking to see if any could halt the virus’s progress.

PhD student Corina Stewart led the charge, testing the faux-bola viruses against a suite of drugs in cell cultures to see if any can halt the virus in its path. A class of drugs used to treat cancer seemed to do the trick.

With their possible Ebola treatment — written up in PLOS Pathogens — identified, the UOttawa team then needed to see how the drugs stacked up against the real thing.

Inside a biosafety level 4 laboratory in the National Microbiology Laboratory in Winnipeg, the University of Manitoba’s Darwyn Kobasa tested the chemotherapy drugs against full-on Ebola, and got the same result.

Chemotherapy drugs are notoriously tough on people, and the kinase inhibitors that stymie Ebola in a Petri dish are no different. But an Ebola infection is even worse, and the short course of the disease may help minimize damage if the approach works in humans.

Of course, fighting off Ebola in a non-human primate or person, rather than a dish, is a horse of a different color. But because all known filoviruses thus far utilize the same key to unlock cells, these chemotherapy drugs (some of which are already FDA approved) may be able to provide defense against not just Ebola but the whole ball of snakes.

Medicine
Scientists uncover key to future hepatitis C vaccine
While treatments are available for HCV-related infections, they are expensive, hard to access, and do not protect against reinfection.
By Alba Torrents de la Peña and Lisa Eshun-Wilson

Virology
How flu got milder since 1918 pandemic
The risk of death from influenza has declined over time, but globally, hundreds of thousands of people still die from the disease each year.
By Saloni Dattani and Fiona Spooner | Our World in Data
Up Next 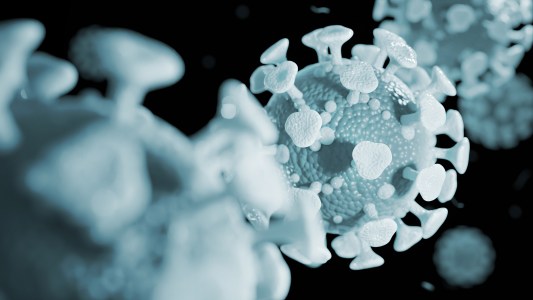 SARS-CoV-2 mutations, which cause new variants of the virus, are eluding the virus’s proofreader. New research shows why.

Coronavirus
Researchers have discovered how SARS-CoV-2 is mutating
By B. David Zarley
Subscribe to Freethink for more great stories
Subscription Center
Sections
Video
Freethink
Subscribe
We focus on solutions: the smartest people, the biggest ideas, and the most ground breaking technology shaping our future.
Subscribe