A type of ultraviolet light that isn’t harmful to humans is able to kill 98% of airborne microbes indoors, according to a new study — making it a potentially powerful weapon in the fight against COVID-19, flu, and hospital-spread diseases.

“In terms of preventing airborne disease transmission, far-UVC lights could make indoor places as safe as being outside on the golf course on a breezy day at St. Andrews,” said senior author Kenneth Wood from the University of St. Andrews.

Your chance of catching COVID-19 inside about 19 times higher than outdoors.

Why it matters: Like many viruses, the one behind COVID-19 spreads primarily person-to-person through airborne particles — an infected person exhales the coronavirus-carrying particles, and another person inhales them.

When you’re outside, the fresh air flow can quickly disperse these airborne particles, but indoors, they can linger in the air — that makes your chance of catching COVID-19 inside about 19 times higher than outdoors.

The challenge: The best way to minimize transmitting COVID-19 indoors is by installing ventilation systems that replace the air in a room more regularly than the standard home or office rate of three times per hour.

Those ventilation systems can be costly, though, and even the best of them can’t make indoor air as safe as outdoor air — the most air replacement they can practically achieve is about 20 times per hour.

An alternative way to disinfect indoor air is by exposing it to a type of ultraviolet light called UVC light. Since the pandemic, some transit hubs have begun using robots with UVC lights to do deep cleaning, and even before COVID-19, a few hospitals were using UVC to sterilize intensive care units between patients.

The problem is that, while UV light does destroy microbes, it also damages human eye and skin cells, so it can’t be used while people are in a room.

What’s new? About 10 years ago, Columbia University scientists suggested that a type of UVC light with a shorter wavelength — far-UVC light — would be able to kill airborne microbes without harming people.

Since then, scientists have proven the theory in lab experiments, but the new study, published in Scientific Reports, is the first to show that far-UVC light can kill microbes in a full-sized room under real-world conditions.

Within five minutes, 98% of the microbes were inactivated.

The study: For the study, an aerosol mist of S. aureus — the bacteria that causes staph infections — was sprayed into a room.

Overhead far-UVC light lamps were then turned on, and within five minutes, 98% of the S. aureus microbes in the room were inactivated. This low level of microbes was maintained in the room even as new aerosols were sprayed into it.

According to the researchers, the impact of the lights was equivalent to replacing the air 184 times per hour.

The big picture: Because viruses are even more susceptible to far-UVC light than bacteria like staph, the researchers believe the lights would be even more effective against COVID-19 than they were against the bacteria.

“[E]vidence from multiple studies suggests it may be a safe way to prevent the transmission of any virus, including the COVID virus and its variants, as well as influenza and also any potential future pandemic viruses,” he added. 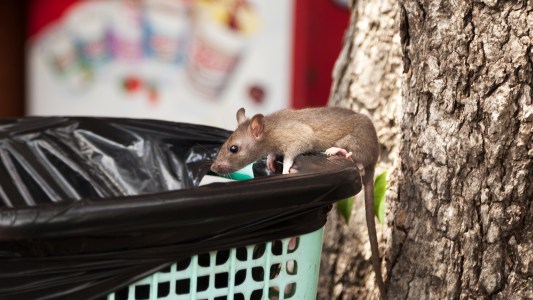 Internet-connected rat traps are bringing rodent control into the 21st century, helping cities leverage data in the battle against rats.