The FDA has just approved a breakthrough genetic treatment, a first of its kind therapy that silences a gene that causes amyloidosis and nerve damage.

The treatment relies on RNAi, or “interfering” RNA, to block certain strands of DNA from being translated into proteins. Unlike traditional gene therapy, the technique doesn’t remove or alter the underlying mutation, but it effectively “mutes” it so it can’t do any damage.

Developed by Alnylam Pharmaceuticals, this is the first time that the technique has been approved to treat disease in humans, but scientists have used it for years to “knock down” genes in mice in order to model various diseases.

The potential upside for therapies with RNAi is huge, which is why its discoverers won the Nobel Prize for Medicine in 2006. This is likely to be the first of many advanced treatments to deploy the technique. It also has widespread potential applications in agriculture, from suppressing natural toxins and allergens in crops to targeting pests and weeds.

How to Build Stuff (Or Not)

To wildly oversimplify things, your body is made of cells, and cells are made of proteins. To make proteins, cells use a molecule called RNA to carry instructions from your DNA to protein factories called ribosomes. RNA translates DNA from abstract code into specific instructions for assembling proteins.

Many types of genetic disease (whether inherited or developed later in life) are caused by cells making the wrong kind of protein—maybe it’s misshapen, or toxic, or in the wrong organ, or there’s simply too much of it.

Traditional pharmaceuticals use chemical compounds to block the protein from doing its job, break it down, or suppress it from being made. But hitting the right target in complex chemical reactions is extremely challenging, and it can take literally decades of trial and error to find the right chemical.

Gene therapies try to go right for the source, by deleting or replacing the mutated DNA that has the bad protein instructions. But your cells really don’t like anything messing with your DNA (for very good reason), so it’s turned out to be difficult to edit enough cells (potentially billions of them) to make a dent in many diseases.

When pharmaceuticals and biotech fail, there’s another approach, right in the middle: cut off RNA messengers before they can turn DNA into proteins. Fortunately, your body already has a process for doing this, called RNA interference (RNAi).

Why would cells want to interfere with their own RNA? Often, it’s just another way to control the rate of protein production, but it can also be a defense mechanism against viruses that try to sneak their RNA into the cell to hijack its protein machinery.

RNAi is a highly complex process, but fundamentally, it’s a way to shred RNA before it can be translated into protein. Researchers have used the technique successfully to silence gene expression in mice to simulate diseases and then test treatments, and there’s a number of applications in the works for modifying crops to remove natural allergens or toxins.

In 2006, the discoverers of RNAi won the Nobel Prize in Medicine, and the 12 years since have been a race to develop and commercialize a new class of drugs based on their breakthrough.

Alnylam won that race this month, and their therapy will be the first to use RNAi to treat disease in humans. The FDA approved only a very narrow use of the drug, treating neuropathy or nerve pain caused by a rare hereditary form of amyloidosis.

But some experts believe that it could eventually be approved for treating heart damage, another serious effect of amyloidosis, and even the non-hereditary forms of the disease, which are still ultimately caused by the overproduction of amyloid protein.

The company has three other RNAi drugs in the pipeline, likely headed for approval soon, intended to treat causes of high cholesterol, porphyria, and hemophilia. FDA Commissioner Scott Gottlieb made optimistic comments about the future of RNAi therapies in his press release announcing the drug’s approval: “This approval is part of a broader wave of advances that allow us to treat disease by actually targeting the root cause, enabling us to arrest or reverse a condition, rather than only being able to slow its progression or treat its symptoms.”

This drug, the crest of that wave of innovation, will come at a steep price—nearly $350,000, even after discounts. At that price, Alnylam hopes to rapidly recoup its estimated $2.5 billion investment in research and development, but insurance companies and governments will likely balk at the cost. It remains to be seen if these treatments can become either widespread or cost effective with mid-six-figure sticker prices. 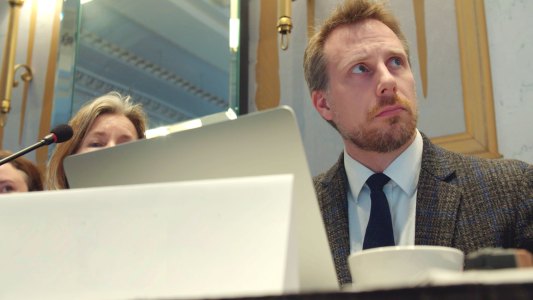 For years, there was no diagnosis, no treatment, and no cure — because his son’s disease had never been seen before. That wasn’t going to stop this dad.

Series | Superhuman
Hunting down his son’s killer7:37
Subscribe to Freethink for more great stories
Subscription Center
Sections
Video
Freethink
Subscribe
We focus on solutions: the smartest people, the biggest ideas, and the most ground breaking technology shaping our future.
Subscribe