Among COVID-19’s worst-case scenarios, one thankfully did not come to be: a winter wave of coronavirus, plus a nasty flu season — a “twindemic.”

Instead, we ended up with a flu season that never was. According to the CDC, the U.S. has had just 600 flu deaths this season, compared to 22,000 the year prior, Scientific American reports.

“It’s absolutely remarkable,” Matt Binnicker, director of clinical virology at the Mayo Clinic, told The Atlantic. “I fully expected there to be a typical influenza season this year.”

Flu has all but disappeared in countries around the world, likely because the measures people have adopted to avoid COVID-19 work even better against the less contagious influenza virus.

And there may be another bonus to stopping the flu from circulating for a year, STAT’s Helen Branswell reports: we may have made an entire clade of influenza virus disappear.

A crushed season: This past flu season had the fewest cases since we began keeping records, the New York Times reported, a rare bright spot in a difficult time.

The flu’s been on the run globally, with cases down almost everywhere. Researchers aren’t sure what that means when the virus makes its inevitable comeback.

“We don’t really have a clue,” Richard Webby, director of the World Health Organization Collaborating Centre for Studies on the Ecology of Influenza in Animals and Birds, told the Times. “We’re in uncharted territory.”

Perhaps, with so many people having missed their usual date with the virus and now more susceptible to infection, it will come roaring back worse than ever, even striking at unusual times or new places. Or, perhaps, having missed out on its chance to mutate as it moves through humanity, the virus may come back weaker.

A slippery foe: “Flu is as diverse and changeable a virus against which a licensed vaccine exists today,” Philip Dormitzer, VP and chief scientific officer of viral vaccines for Pfizer, once told me.

Influenza is capable of mutating quickly, which is especially frustrating considering that the virus was already pretty diverse to begin with. There’s influenza A and B, each with multiple subtypes (or lineages), each of those with multiple clades — all mutating constantly every year.

To figure out what flu strains should be targeted in next season’s vaccine, researchers keep tabs on what’s circulating around and take their best guess.

Since 2012, a flu strain called H3N2 has been acting differently, Branswell reports at STAT.  The virus has been splintering into various factions, called clades.

Choosing the right clade to vaccinate against determines how successful our flu shot is. With more clades and more diversity, it becomes harder to guess the right strains to include in the vaccine, which reduces its efficacy. The less effective the vaccine, the more people may die — like in the particularly lethal 2017-18 season, when the flu vaccine failed and 61,000 people died.

Draining the virus pool: But flu surveillance right now suggests an entire clade of H3N2 may have disappeared. Poof. Extinct.

Meanwhile, an entire lineage of influenza B virus, called B/Yamagata, may be gone, as well.

Neither B/Yamagata nor the H3N2 clade (called 3c3.A) have been seen by any lab, anywhere in the world, since March 2020.

“I think it has a decent chance that it’s gone,” computational biologist Trevor Bedford told Branswell, referring to the H3N2 clade. “But the world’s a big place.”

In a normal year, there’s around 20,000 genetic sequences logged in a global flu database called GISAID, Branswell reports. GISAID’s data is used to monitor how flu strains are evolving.

This year, only 200 sequences were uploaded.

The drop can partially be explained by everyone turning their attention to SARS-CoV-2. But the lack of human circulation this year is making an impact, as well; the influenza pool has gotten shallower.

The flu’s been on the run globally, with cases down almost everywhere. Researchers aren’t sure what that means when the virus makes its inevitable comeback.

“There had been maybe five-ish, six-ish (H3N2) clades circulating and now there’s two or three that made it through that bottleneck,” Bedford said.

If an entire clade has gone out of circulation, it makes the job of creating the best vaccine perhaps a little easier — especially an H3N2 clade, which is the toughest strain to get a handle on.

“That’s a great thing. … Currently when we sit down to make recommendations for vaccine strains, it’s always the headache virus,” Webby told Branswell. “If we have to pick a (subtype) to lose diversity in, that would be the one.”

Gone, or hiding? While some researchers are optimistic, it seems to be a tempered optimism; absence of evidence isn’t evidence of absence, after all, and the H3N2 clade could very well be out there.

“Just because nobody saw it doesn’t mean it has disappeared completely, right? But it could,” microbiologist Florian Krammer told Branswell.

Only some viruses ever get sequenced, experts point out, meaning the database isn’t exhaustive. And influenza B lineages also have a history of laying low periodically, which means B/Yamagata may soon reappear.

The only thing certain is that influenza will continue to mutate, and the annual struggle will go on. (At least, until we have a universal flu vaccine.) 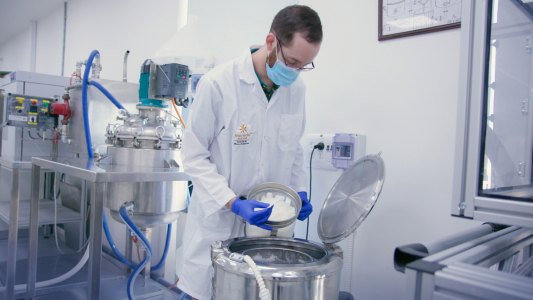 Is there such a thing as healthy sugar? Food scientists in Israel are hacking the sugar molecule itself – eliminating the need for subpar alternatives.

Series|Just Might Work
Can we hack sugar to be healthy?
6:26
By Doug Dais
Subscribe to Freethink for more great stories
Subscription Center
Sections
Video
Freethink
Subscribe
We focus on solutions: the smartest people, the biggest ideas, and the most ground breaking technology shaping our future.
Subscribe