By modifying just one gene, an international team of researchers was able to extend the life expectancy of mice by 23% — and they think their results may translate to humans.

“The change in life expectancy is significant, when you consider that an equivalent jump in human life expectancy would have us living on average until almost 120,” lead researcher Haim Cohen of Bar-Ilan University told the Times of Israel.

A longer life: The average human life expectancy has doubled in just the past 200 years, thanks in no small part to scientific breakthroughs in medicine, nutrition, and disease.

Future breakthroughs might allow us to live decades (or even centuries) longer, and across the globe, scientists are pursuing promising leads in the hunt for the proverbial fountain of youth.

Genetic clue: One of those leads is the sirtuin 6 (SIRT6) gene. Past research has linked the protein produced by this “longevity gene” to healthy aging and longer life expectancy, but the exact nature of that link isn’t entirely clear.

To better understand the connection, Cohen’s team genetically modified mice so that their SIRT6 genes would produce higher-than-normal levels of the protein.

The results: Not only did the genetically modified mice have a 23% longer life expectancy than wild mice, they also appeared to stay healthy longer.

Older modified mice chose to spend more time on the running wheels in their cages, and they ran faster and longer distances. They were also able to overcome age-related diseases, such as cancer and blood disorders, more readily.

Why it matters: Analysis suggests that increasing SIRT6 appeared to allow older mice to generate energy from sources they’d normally have trouble tapping into at their age, such as fats and lactic acid.

“This discovery, combined with our previous findings, shows that SIRT6 controls the rate of healthy aging,” Cohen said in a press release.

If we can determine how to activate it in humans, we will be able to prolong life.

“If we can determine how to activate it in humans, we will be able to prolong life, and this could have enormous health and economic implications.”

The next steps: Cohen’s team hopes to use what it learned from the mice to develop a drug that could extend the life expectancy of humans by boosting the gene’s activity.

“We are developing small molecules that may increase the levels (of) SIRT6, or make existing amounts of the protein more active,” he said. “They may be used in the future to address aging.” 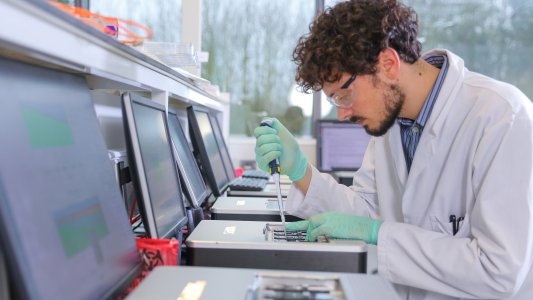 Genetics
The entire human genome has (finally) been sequenced
Subscribe to Freethink for more great stories
Subscription Center
Sections
Video
Freethink
Subscribe
We focus on solutions: the smartest people, the biggest ideas, and the most ground breaking technology shaping our future.
Subscribe