In March, with the number of coronavirus cases across the world creeping higher and higher, the World Health Organization issued a simple directive to anyone who would listen: “test, test, test.”

But with too many people and too few test kits, researchers across the world are having to improvise, using group coronavirus testing as a way to dramatically increase their testing capabilities.

“This approach should reduce the chance of infection and flatten the infection curve.”

Group testing, also known as pool testing, is a technique that’s been around since World War II, when the U.S. Army first employed it to suss out syphilitic soldiers.

Rather than pay for each soldier to undergo a costly test, officials would combine blood samples from a group of soldiers and then test that joint sample.

If the test came back negative, all the men could be assumed free of the disease. If it came back positive, the Army could test the soldiers in that group individually to find the one (or more) with syphilis

Now, researchers in the United States, Israel, and other nations are employing the technique to the coronavirus outbreak  — and they’re finding the method to be incredibly effective.

He split 60 samples into 12 groups of five before testing, and found he was able to effectively identify all of the positive samples in the group using 24 kits instead of the usual 60.

“He saved more than 50% of the reagents by doing it that way” Nebraska’s Chief Medical Officer Gary Anthone told KETV. “It’s an ingenious idea.”

During a group coronavirus testing trial in Israel, meanwhile, researchers tested up to 64 samples at once — and if even one sample in the group was positive, the test was able to detect it.

Studies of group coronavirus testing in Germany and Austria found the technique to be effective as well.

“The results give cause for optimism that when globally established, the procedure will quickly enable better information about the number of people actually infected,” Sandra Ciesek, a lead researcher of the German study, said in a news release.

Based on these results, implementing group coronavirus testing on a wide scale could allow nations to dramatically increase the number of people they test.

According to the German team, their nation could immediately go from a daily testing rate of 40,000 people to upwards of 400,000 people — all without any drop in the quality of the diagnosis.

“This is not a scientific breakthrough, but a demonstration of the effectivity of using the existing method and even the existing equipment to significantly increase the volume of samples tested per day,” Roy Kishony, one of the researchers behind the Israeli study, said in a statement.

“This approach should reduce the chance of infection and flatten the infection curve,” he concluded. 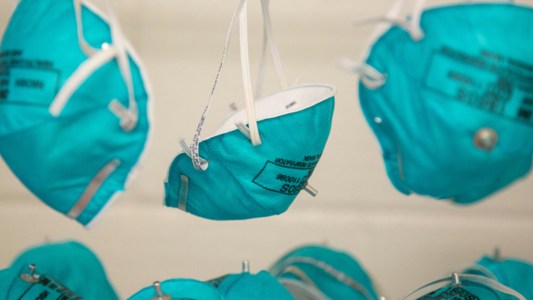 A group of researchers launched a website that teaches healthcare workers everything they need to know about reusing coronavirus masks as safely as possible.