UK drugmaker GSK’s RSV vaccine was nearly 94% effective at preventing severe disease in a huge phase 3 trial in older adults — suggesting seniors might soon be able to protect themselves against this potentially deadly infection, which currently has no approved vaccine.

The challenge: RSV is a common respiratory virus. Most infections are mild, with cold-like symptoms that go away on their own in about a week, but RSV can cause serious health issues, such as pneumonia, bronchiolitis, and other lower respiratory tract diseases.

Infants and olders adults are particularly at risk of severe RSV infections — every year in the US, 177,000 adults over the age of 65 are hospitalized due to RSV infections and 14,000 die from them.

GSK’s RSV vaccine: Despite decades of effort, there still isn’t an approved RSV vaccine, but that may soon change. In a phase 3 trial of about 25,000 adults over the age of 60, GSK’s RSV vaccine was found to be 82.6% effective at preventing RSV-caused lower respiratory tract disease.

The shot was also 94.1% effective at preventing severe disease — defined as two or more symptoms associated with LRTD or an assessment of “severe” by a trial investigator, which was also confirmed by an independent committee. (Because the study was “double blind,” neither patients nor doctors knew at the time who received the vaccine or the placebo.)

The vaccine was well-tolerated, with the most common adverse effects being injection site pain, fatigue, muscle pain, and headache. GSK plans to apply for regulatory approval before the end of 2022.

“We believe that with the high vaccine efficacy demonstrated in this pivotal trial, our vaccine candidate has the potential to help reduce the significant global burden of RSV-associated disease in older adults,” said Tony Wood, GSK’s CSO.

The big picture: While GSK’s RSV vaccine isn’t designed to protect the other group at high risk of severe infection — babies and toddlers — if it can lower the number of cases among seniors, there will be fewer people to spread the virus to those at the other end of the age spectrum.

GSK’s isn’t the only promising RSV vaccine for older people nearing the end of the development pipeline, either.

In August, pharma giant Pfizer announced positive top-line results of its own RSV vaccine trial  — that shot was 66.7% effective against two or more LRTI-associated symptoms in seniors over 60, and 85.7% effective at preventing three or more of those symptoms.

Meanwhile, phase 3 trials of shots developed by Johnson & Johnson and Moderna are ongoing — data on those is expected later in 2022.

“We call it the renaissance of RSV,” Octavio Ramilo, an infectious-diseases pediatrician at Nationwide Children’s Hospital, told the Washington Post. “After all these years … it’s a very exciting time for us.” 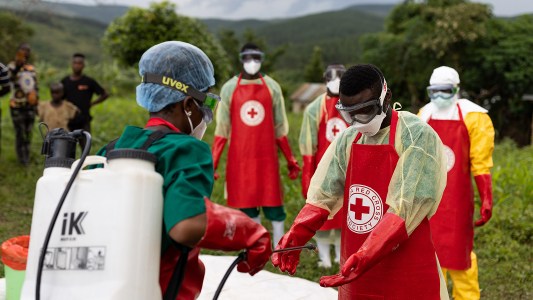 Caused by the Sudan strain of Ebola, current vaccines and therapies approved for Ebola won’t work in Uganda. But these might.