Pharma giant Pfizer’s respiratory syncytial virus (RSV) vaccine is nearly 86% effective at preventing severe illness in older adults, according to a huge phase 3 trial — putting us a step closer to finally being able to protect against potentially fatal RSV infections.

The challenge: RSV is a common respiratory virus. Most people recover from an infection within a week or two after experiencing mild, cold-like symptoms, but the virus can cause pneumonia, bronchiolitis, or other serious health issues, too.

Children, older adults, and people with certain health issues are at risk of severe illness and account for the majority of the 160,000 deaths linked to RSV every year. While there are some treatments for RSV, there isn’t a vaccine, despite decades of effort.

In 2021, Pfizer tested a new protein-based RSV vaccine in a small human challenge study. Based on its promising results, it began enrolling volunteers for a large phase 3 trial.

About 160,000 people die from RSV every year — and most of them are children and older adults.

Pfizer’s RSV vaccine was well-tolerated and presented no safety concerns during the trial.

Looking ahead: Pfizer says it plans to send the trial results to a scientific journal for peer-review. It also plans to submit an application to the FDA in fall 2022 to approve the shots for adults over the age of 60.

A separate, ongoing trial of Pfizer’s RSV vaccine is testing its ability to protect infants by vaccinating pregnant women, and Pfizer hopes to trial the shot in other age groups in the future.

The company is also collecting data on its trial participants to see how long protection lasts — it’s possible people might need to get an RSV vaccine every year, like we do for the flu, or protection might last longer.

A separate, ongoing trial of Pfizer’s RSV vaccine is testing its ability to protect infants by vaccinating pregnant women.

The big picture: Pfizer isn’t the only major drug company developing an RSV vaccine — GSK and Johnson & Johnson are both conducting late-stage trials of their own promising shots. Moderna, meanwhile, is working on an mRNA-based shot that would protect against flu, COVID-19, and RSV.

If any of these RSV vaccines are approved, the shots have the potential to prevent countless hospitalizations and save tens of thousands of lives annually. 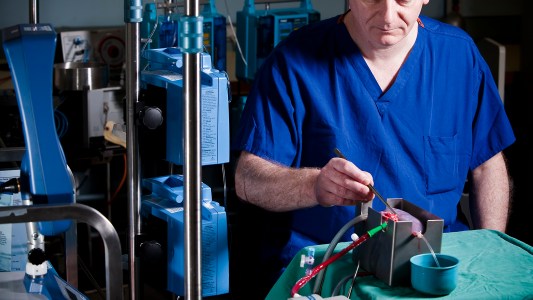 Kidneys still need to be tissue matched, but by converting them to type O, more will be available for transplant.