Pfizer has developed a respiratory syncytial virus (RSV) vaccine that was 100% effective against disease in a small human challenge trial.

The result is a hugely promising development in the fight against the deadly virus, which still has no approved vaccine — and is surging again across the U.S., as social distancing ends.

The challenge: RSV is a common, flu-like virus that infects the lungs and respiratory tract.

For most adults, the symptoms of an RSV infection are mild — it’s about as bad as having the common cold. However, the virus can lead to pneumonia or even death in children, older adults, and people with certain health issues, such as a weakened immune system.

Why it matters: While there are treatments to address the symptoms of an RSV infection, there currently isn’t a cure or a vaccine. Every year, according to the CDC, 177,000 adults over age 65 are hospitalized by RSV, and 14,000 die.

If Pfizer’s RSV vaccine can effectively prevent illness, it has the potential to save many of those lives, as well as tens of thousands more around the world.

The RSV vaccine: During an investor call on July 28, Pfizer’s CSO Mikael Dolsten reported that the company had tested a protein-based RSV vaccine in a human challenge trial — the fastest way to test whether a vaccine works.

During the trial, 62 volunteers under the age of 50 were deliberately exposed to RSV. Half were vaccinated, and half were a control group. According to Pfizer, the shot was 100% effective at preventing mild-to-moderate infection (meaning any infections were asymptomatic).

Data from the trial (which has yet to be submitted to a scientific journal) also showed a dramatic difference in viral load between the vaccine and placebo groups.

The RSV vaccine was well-tolerated, too, with Dolsten reporting that most participants experienced minimal to no side effects.

“Based on these overwhelmingly positive data, we will accelerate the development of our RSV vaccine in adults,” he said.

The caveats: Pfizer still needs to publish the results of the trial in a peer-reviewed journal — right now, we just have to take the company at its word that the RSV vaccine was effective in the challenge trial.

The group tested in the human challenge trial, healthy adults under 50, is also the least likely to experience a severe case of RSV, so we still need to know if the vaccine is as effective in the people who need it most: older adults and children.

If the vaccine could at least prevent infected younger people from spreading the virus, that would be useful, too, but again, we don’t know whether that’s the case yet.

Looking ahead: Pfizer plans to launch a large phase 3 trial of its RSV vaccine in September, and results from that trial could be ready in early 2022.

The speed of the results will depend on how RSV behaves during the winter, after it all but disappeared (like the flu) during the pandemic. But already the U.S. is experiencing a surge of RSV, as masks come off and social distancing ends.

Even if Pfizer’s vaccine doesn’t pan out, one in development from Moderna — the other winner of the COVID-19 vaccine race — might.

That shot takes advantage of the mRNA tech that proved invaluable during the pandemic, and Moderna is already trialing it in people of all ages, including babies and seniors. 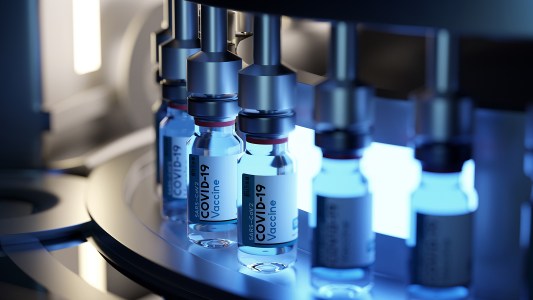