A widely accessible HIV cure could hinge upon a single gene — and CRISPR is helping scientists study it.

Since 2007, at least two HIV patients (in Berlin and London) have been cured of the virus after receiving bone marrow transplants to treat cancer.

Both transplants came from donors with a mutated version of the CCR5 gene, which breaks a protein HIV uses to infect cells — effectively making them immune to the virus.

Months after receiving the transplants from immune donors, the patients’ HIV infections were no longer detectable, even after they went off their antiretroviral drugs.

That is huge. As of 2019, more than 33 million people were living with HIV, and while we’ve gotten far better at managing the virus, nearly 700,000 people still died of HIV-related illnesses last year.

But there’s a reason this HIV cure isn’t being administered around the world.

Many subsequent attempts to transplant the cure have been unsuccessful, and because the CCR5 mutation is rare, studying it is difficult.

Now, researchers at the University of Wisconsin-Madison have used CRISPR to create the mutation in monkey embryos.

If they can successfully breed monkeys from those embryos, they could use the animals to study the CCR5 mutation — and perhaps find a way to cure HIV without relying on the luck of finding donors who carry it naturally.

Prior to this study, the researchers had already developed a way to use CRISPR to remove the CCR5 gene from human stem cells, so they applied that same technique to the single-celled embryos of Mauritian cynomolgus macaque (MCM) monkeys.

“The thought is that if you make the genetic edit in the early embryo that it should propagate through all the cells as the embryo grows,” researcher Jenna Kropp Schmidt said in a press release.

The goal is to transfer these embryos into surrogates.

Genes come in pairs, and in more than half the embryos the researchers edited, CRISPR successfully deleted one of the two CCR5 genes. In about a third of the embryos, it deleted both.

As the embryos developed in the lab, the daughter cells had the mutation, too, just as the researchers had hoped.

“The goal now is to transfer these embryos into surrogates to produce live offspring who carry the mutation,” Schmidt said.

The Right Macaque for the Job

The researchers’ choice of MCMs for their study is key to their development of a reliable HIV cure.

Cynomolgus macaques are popular for scientific research because their genomes are similar to our own. For centuries, a group of those monkeys lived by themselves on the island of Mauritius — MCMs are descendants of those particular macaques.

As for what that has to do with a cure for HIV, human DNA contains a group of genes known as the “major histocompatibility complex” (MHC). A person can only receive a bone marrow transplant from someone with the same MHC as them, and there are hundreds of variations in people.

In these monkeys, however, there are just seven variations. That should make it easier for the researchers to find compatible monkeys for transplant studies if they can get surrogates to carry edited embryos to term — something no one has done with MCMs before.

If this monkey research goes well, though, the ultimate goal would be to edit the mutation into human stem cells, which could then be used as an “off-the-shelf” HIV cure — no need for patients to wait for that unicorn bone marrow match who’s also a carrier of the CCR5 mutation. 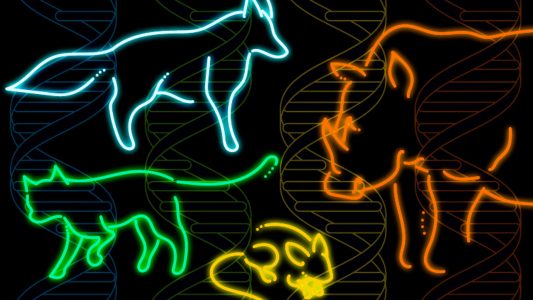 The Zoonomia Project is the largest database of mammalian genomes to date, and it’s already helping researchers study SARS-CoV-2 and extinction risk.

Genetics
This databank of mammalian genomes is the Noah’s Ark of DNA
Subscribe to Freethink for more great stories
Subscription Center
Challenges
Video
Freethink
Subscribe
We focus on solutions: the smartest people, the biggest ideas, and the most ground breaking technology shaping our future.
Subscribe