Today, a person can lower their risk of an HIV infection by taking medications daily, but the drugs can be costly, and for some people, particularly those in many African nations, they simply aren’t accessible.

An HIV vaccine, however, could provide a way to inoculate people against the virus without the need to take daily prophylactic drugs, and thanks to a new study, we’re now a major step closer to having one at our disposal.

The Need for an HIV Vaccine

Past HIV vaccine research efforts have largely focused on finding ways to prompt the immune system to create virus-fighting antibodies.

However, the scientists behind this in-development HIV vaccine, detailed in the journal Nature Medicine, aimed to trigger another type of immune system activity, too.

The scientists believe their study puts the world one step closer to an effective HIV vaccine.

“This vaccine also boosted cellular immunity, the mustering of an army of immune cells that chase down cells infected by the pathogen,” Stanford University researcher Bali Pulendran said in a news release. “We created a synergy between these two kinds of immune activity.”

The team did this by creating an HIV vaccine that makes use of one protein found on the outer surface of HIV that  stimulates antibody production (Env) and another viral protein that stimulates cellular immunity (Gag).

For their study, the scientists inoculated three groups, each containing 15 rhesus macaques with the various components of their HIV vaccine, over the course of a 40-week period.

The first group received several inoculations with Env, as well as adjuvant often used in vaccines to enhance their immune response.

The second group got Env, too, but the scientists also injected the monkeys with a trio of attenuated viruses, which they’d modified to contain the gene for Gag.

The final group served as a control and only received the adjuvant.

After that 40-week process wrapped up, the scientists let the macaques rest for an additional 40  weeks. They then gave all the animals a booster shot of Env and let them rest for another four weeks.

Finally, once a week for 10 weeks, the scientists exposed the monkeys to SHIV (a cross between the monkey form of the virus, SIV, and the human form, HIV, used for researching HIV vaccines in monkeys).

Monkeys that had produced antibodies to the virus did the best. But interestingly, some monkeys that did not have high levels of antibodies were still able to resist the infection.

Those monkeys who got the Env shots but still lacked antibodies were still highly susceptible to the virus, but several in the Env-plus-Gag group remained unaffected — even without high levels of antibodies.

We think the same approach could be feasible for other pathogens, including influenza, TB, malaria and, now, COVID-19.

“This is an intriguing result because increasing the potency of neutralizing antibodies has been thought to be crucial to a vaccine’s effectiveness, but doing so is difficult,” Emory University research Cynthia Derdeyn said in a news release.

The duration of protection for the macaques in the Env-plus-Gag group of the HIV vaccine study was also remarkable.

After a 20-week break, the scientists exposed six of those monkeys, as well as six from the Env-only group, to SHIV again.

Only one of the Env-only monkeys was still unaffected by the virus, but four that got both kinds of shots still remained protected.

The scientists believe their study not only puts the world one step closer to an effective HIV vaccine, but also illustrates the value of targeting both kinds of immune activity in pursuit of other types of vaccine.

“We think the same approach could be feasible for other pathogens, including influenza, TB, malaria and, now, COVID-19,” Emory’s Rama Amara said in the news release. 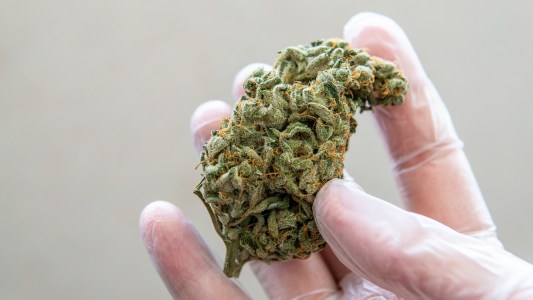 The cannabis compound CBD can slow the growth of brain cancer cells, but it’s a long way from a new cancer treatment.