Cannabidiol (CBD) — the cannabis compound that isn’t psychoactive — has earned a reputation as something of a cure-all, supposedly capable of treating everything from anxiety to acne.

While many of those claims are anecdotal — or made by companies hoping to sell consumers on CBD-infused everything — a recently published study suggests that the compound might deserve legitimate consideration as part of a new cancer treatment.

But it’s a long road from Petri dishes to cancer therapy, and CBD has barely started.

Need for a New Cancer Treatment

Glioblastoma is an aggressive type of cancer that forms in either the brain or spinal cord. Approximately 75% of people diagnosed with it die within a year, and fewer than 7% live longer than five years.

Those survival rates haven’t improved significantly in recent years, which makes the need for a new cancer treatment for glioblastoma patients an urgent matter, according to Chase Gross, one of the Colorado State University researchers behind the CBD study.

In collaboration with researchers from University of California Davis, the CSU team decided to see what effect CBD might have on glioblastoma.

To that end, they introduced both pure CBD and CBD extract, which contains trace amounts of other cannabis compounds, to human and canine glioblastoma cell cultures.

They found that both the pure CBD and the extract was toxic to the cancer cells, disrupting their ability to function and slowing their growth.

But don’t expect CBD-infused gummy bears to cure any cancer in the real world. The in vitro result doesn’t mean much, on its own, because lots of things kill cancer cells — and healthy cells — in a Petri dish.

Research would still need to show that the concentrations of CBD that kill cancer cells are safe for healthy cells, and that they could even be delivered to a brain tumor — something that ingested CBD definitely could not do on its own.

Gross was scheduled to present the team’s research at the American Society for Pharmacology and Experimental Therapeutics annual meeting in May, where he would no doubt be faced with such questions.

That meeting was cancelled due to the COVID-19 pandemic, but the study’s abstract was published in the FASEB Journal on April 17.

The next step for the researchers is to see if CBD has the same effect on glioblastoma cells in animal models.

“CBD has been zealously studied in cells for its anticancer properties over the last decade,” Gross said. “Our study helps complete the in vitro puzzle, allowing us to move forward in studying CBD’s effects on glioblastoma in a clinical setting using live animal models.”

The next step for researchers is to see if CBD has the same effect on glioblastoma cells in animal models.

But even if it does, the researchers don’t expect CBD alone to serve as a new cancer treatment — according to the study abstract, the concentrations of the compound needed to produce the desired effects “may not be pharmacologically attainable.”

In other words, you can’t get that much CBD into a brain tumor, at least not without killing the patient.

Still, CBD has already proven that its medical benefits aren’t all hype — see: the FDA-approved epilepsy drug Epidiolex — and now, it seems the compound could play an important role in cancer treatment, too.

“Our work shows that CBD has the potential to provide an effective, synergistic glioblastoma therapy option and that it should continue to be vigorously studied,” Gross said in a press release. 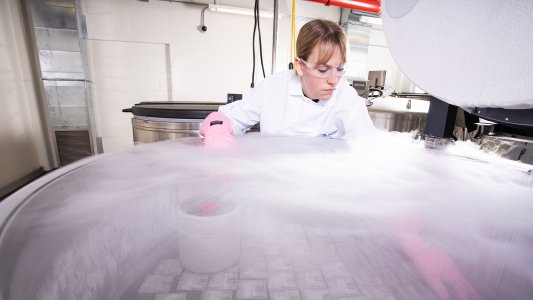 With their labs closing and the future unclear, researchers are sending precious cargo — the sperm of lab mice — to be frozen and stored.

Animals
Researchers are rushing to freeze… lab mice sperm?
By B. David Zarley
Subscribe to Freethink for more great stories
Subscription Center
Sections
Video
Freethink
Subscribe
We focus on solutions: the smartest people, the biggest ideas, and the most ground breaking technology shaping our future.
Subscribe