A marine biologist intentionally infected himself with parasitic hookworms — all in the name of science.

As a participant in a hookworm vaccine study, he documented his journey in a series of detailed tweets and pictures that will make your skin crawl.

“Within minutes I felt a tingling sensation under the patch. The baby worms were penetrating my skin,” Jimmy Bernot tweeted.

As a crustacean expert at the National Museum of Natural History, parasitic worms are not his specialty. But cohabitating with them for nearly a year left him describing a sense of connectedness during the otherwise isolating pandemic lockdowns.

“The baby worms were through my skin & riding around my circulatory system like a tube slide at a water park. At least that’s how I pictured them. This was during COVID lockdown — I appreciated the company & started using the royal ‘we,'” he wrote.

The study was an effort to find a hookworm vaccine. Bernot was infected with the hookworms through a gauze patch placed over his wrist. Fifty worms burrowed into his skin and began making their way toward his circulatory system, multiplying rapidly. Bernot posted pictures of his rash on Twitter, which initially looked like tiny red dots, but eventually appeared like large blisters.

“The itch was more intense than any I’ve experienced — worse than poison ivy. I slept with Benadryl cream next to my bed b/c the itching rash would wake me up in the middle of the night,” he tweeted.

Eventually, the rash wore away, and the worms found their way to his lungs and small intestine.

The CDC estimates that 576-740 million people in the world are infected with hookworm. The problem is most common in poor sanitation regions because the parasites are spread via eggs in feces. The hatched larvae can penetrate the skin, infecting more people.

For the most part, the worms wiggle around inside the human body, unbeknownst to the host. In extreme cases, hookworms can cause anemia, weight loss, and fatigue, but the problem is cured with a single dose of medicine.

After Bernot was injected with the hookworms, he received either a shot of the experimental hookworm vaccine or a placebo. For the next year, Bernot had regular check-ups with his doctor. He says he barely felt any side effects from housing the thread-sized nematodes. He coughed only twice — something he remembers clearly because he had to take notes on everything he was feeling.

He also had to provide a stool sample every other week to the research team at the George Washington University Medical Faculty Associates. Eventually, eggs appeared in his stool. He estimates a single stool sample had as much as 7,000 eggs.

After the year passed, the doctor gave him three doses of Albendazole, a common anti-worm medication, which cured him.

Overall, Bernot was happy to experience scientific research on the other side for once — volunteering as a study participant instead of a researcher.

“These days we have so many medicines, treatments, and vaccines that make our lives so much easier — it’s easy to overlook all the work and self-sacrifice that goes into making them safe and effective. I got to witness that here and I won’t take that for granted,” Bernot tweeted.

This article has been updated to correctly identify the hookworms at nematodes. 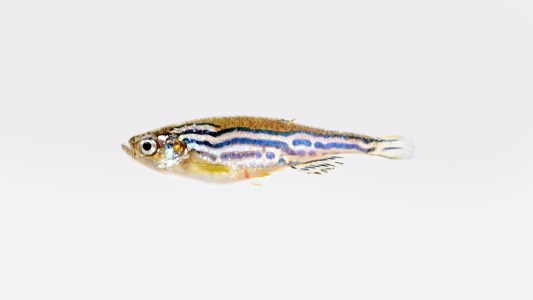 While studying mutant zebrafish, scientists discovered that a single genetic mutation caused the fish to start developing the beginnings of arms.