UC Berkeley engineers have developed a tiny, implantable oxygen monitor that works in tissue deep below the surface of the skin.

The challenge: Oxygen levels in specific tissues can help doctors monitor the health of transplanted organs, the reaction of tumors to radiation therapy, and more — but it’s not easy to measure the levels deep within the body.

Most techniques rely on electromagnetic waves, which can only penetrate a few centimeters below the body’s surface. Some MRIs can measure oxygen levels in deeper tissue, but not in real-time, which limits their use.

The device is smaller than the average ladybug (4.5 by 3 millimeters).

The oxygen monitoring part of the implant consists of a micro-LED, an optical filter, and an oxygen-sensing film, all controlled by a tiny circuit. A piezoelectric crystal converts the electrical signal from that circuit into an ultrasonic signal.

“An ultrasonic transceiver placed on the skin establishes a wireless acoustic link to the implant,” lead researcher Soner Sonmezoglu told Freethink. “The transceiver powers the implant…by delivering ultrasound energy through the tissue.”

The cold water: So far, the only living tissue the implantable oxygen monitor has been tested in belonged to sheep. Much more research is needed before it could be approved for use in humans.

The material currently used to house the device is not suitable for long-term implantation, either — the researchers just wanted to confirm that the implant would work.

“In our study, our main aim was to demonstrate the capabilities of the ultrasonic wireless implant system, so we did not test the implant(‘s) lifetime in sheep,” Sonmezoglu said, “but this implant is suitable for acute and semichronic experiments.”

He did add that the implantable oxygen monitor was still fully functional after spending 10 days in human serum in lab tests.

More to come: This is only the beginning, as far as the researchers are concerned. In addition to hunting for a casing that would allow the device to remain in the body long term, they also want to adapt the implant to monitor other tissue chemistry.

“By just changing this platform that we built for the oxygen sensor, you can modify the device to measure, for example, pH, reactive oxygen species, glucose or carbon dioxide,” Sonmezoglu said in the release.

The researchers also want to see if they can make the implantable oxygen monitor even smaller.

That could make it implantable using less invasive methods — such as laparoscopic surgery or even a simple needle injection — and potentially suitable for even the smallest patients.

“Further miniaturized versions of this device could help us better manage oxygen exposure in our preterm infants in the intensive care nursery setting,” study co-author Emin Maltepe said in the release, “and help minimize some of the negative consequences of excessive oxygen exposure, such as retinopathy of prematurity or chronic lung disease.” 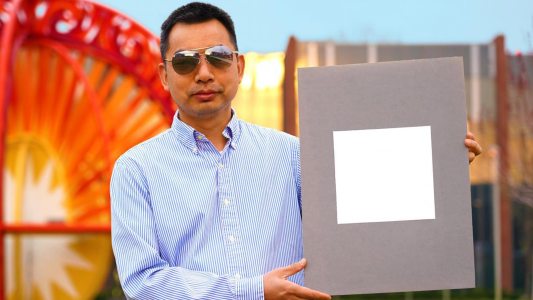 Inventions
The world's whitest paint can cool your house — and the Earth
Subscribe to Freethink for more great stories
Subscription Center
Sections
Video
Freethink
Subscribe
We focus on solutions: the smartest people, the biggest ideas, and the most ground breaking technology shaping our future.
Subscribe