India’s drug regulator approved the world’s first DNA vaccine for COVID-19, pitting a vaccine technology that has mostly seen success in animals against a virus that has poleaxed the world.

The three-dose vaccine uses genetic information to create an immune response to SARS-CoV-2’s spike protein, similar to the mRNA vaccines. But instead of RNA code for the spike protein, it uses a DNA version, delivered with a unique, needle-free system.

The manufacturer claims that the DNA vaccine is 66% effective in preventing symptomatic infections, the BBC reported — including the delta variant, which wreaked havoc in India earlier this year, before spreading around the world. However, as Quartz India pointed out, the data backing this up are not yet publicly available.

“If it gives good protection, this is something India will be proud of.”

The company, Zydus Cadila, based in Ahmedabad, also notes that the DNA vaccine is India’s first COVID-19 vaccine approved for 12-18 year olds. With only a hair over 9% of India’s population fully vaccinated, the hope is that the vaccine, which is more stable than mRNA vaccines and does not need to be stored at sub-freezing temperatures, can help preempt another wave of infections.

“To have a DNA vaccine which works against an infection is a big deal,” virologist Gagandeep Kang told the BBC. “If it gives good protection this is something India will be proud of.”

What is a DNA vaccine? A DNA vaccine is similar to an mRNA vaccine, except it uses small, circular pieces of DNA — called plasmids — to deliver the “hey, make this antigen” message.

DNA vaccines have worked in some animals, such as horses and dogs, but it’s proven difficult in humans. The biggest obstacle is getting the DNA into the cell nucleus, where it can be transcribed, turned into mRNA, and then sent out into the cell to be turned into protein — a hurdle mRNA vaccines simply don’t have to clear.

“The trick lies in assembling the right building blocks of the DNA plasmid to instruct the body’s cells to manufacture the spike protein of SARS-CoV-2,” public health physician and epidemiologist Jammi Nagaraj Rao wrote in The Wire.

Much like mRNA vaccines, a DNA vaccine is also potentially “plug and play”: you just tweak the genetic code in the plasmids to update your vaccine for new strains or new diseases.

So far, DNA vaccines have found the most success in animals; while they have a fine safety record in human trials — not integrating themselves into the host’s DNA, as some had feared may be possible when the research was beginning years ago — the immune response they create has generally been disappointing compared to other vaccines. Still, a lot of research is ongoing, with the vast majority of DNA vaccine candidates focusing on cancer or HIV.

“Plasmid DNA vaccines have been tried in the past. But we know it’s very difficult to get plasmid DNA into the nucleus of human cells, especially in adults,” virologist Jeremy Kamil of the Louisiana State University Health Sciences Center told the BBC.

Which makes seeing that data sooner rather than later particularly important.

“I would be delighted that a vaccine company overcame the immense challenges to make it work,” Kamil said. “But it’s imperative that the efficacy data be vetted independently.”

In addition to being 66.6% effective against symptomatic cases, there was no moderate illness among those who received three doses, and no hospitalizations or deaths among subjects who received at least two doses of the DNA vaccine, the company said.

Another interesting aspect of the vaccine: no needles. Doses are given not with a needle, but with an injector that uses a narrow, powerful stream of fluid to inject the DNA plasmids into the proper depth beneath the skin.

” … it’s imperative that the efficacy data be vetted independently.”

Despite the possible excitement around the emergency authorization against COVID-19, some experts are raising concern around the lack of transparency in the process.

The DNA vaccine “may well be a remarkable innovation story for Indian science – but remarkability does not mean it can remain immune to demands of transparency and approval after due process, with publicly available data,” Rao wrote in The Wire. 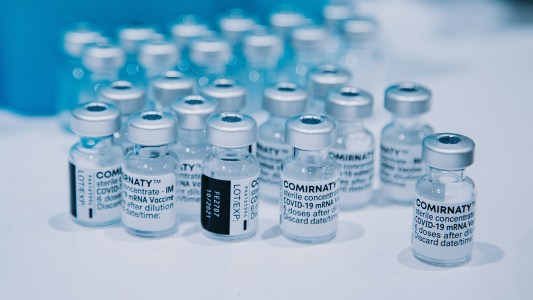 Pfizer’s shot has become the first FDA-approved COVID-19 vaccine, making the transition from emergency use authorization on August 23.