Parasitic wasps are such appalling insects that they famously made Darwin doubt the existence of a benevolent creator.

Like the aliens from “Alien,” these creatures reproduce by paralyzing, but not killing, their prey and then injecting their eggs inside them. The results, for the still-living caterpillars, are a horror show.

From this dreadful process, though, has come a surprising (and potentially life-saving) new invention. Based on the design of the wasp’s needle, researchers in the Netherlands created a new kind of surgical tool, which could be used to remove blood clots or tumors, perform laparoscopic surgery, and even deliver medicine with pinpoint accuracy.

The circle of (parasitic) life: To deposit their eggs inside their “living nursery” (as the CBC calls them), parasitic wasps use long, highly specialized needles called ovipositors.

These flexible, snake-like needles can actually maneuver themselves around obstacles to get at their victims.

“She can send the separate parts … in all directions,” Wageningen researcher Sander Gussekloo said. “But [it] does not have any muscles, so the question is: how?”

In a surgery, the same motion that allows the wasps to deposit their eggs could deposit medicine or be applied in reverse, carrying tissues away.

Cut and slide: The “how” is a unique construction that allows the wasps to slice into their hosts.

As the BBC’s video explains , the wasp’s hollow ovipositor is made of three blade-like components that slide independently over each other, using the friction to drill into their victim as they go.

That friction of the blades is actually what carries the eggs down.

Keyhole surgery: Researchers at the Netherlands’ Delft University of Technology and Wageningen University & Research were inspired by this evolutionary marvel to design a new tool for less invasive “keyhole” surgeries.

Keyhole or “laparoscopic” surgery is designed to be done with only a tiny incision, through which tiny surgical instruments are guided. It’s often employed to suction out tissues with needles, but they can bend or get clogged. Bigger needles cause more damage and still often clog — plus, they are hard to maneuver safely.

The researchers turned to the wasps for a solution.

“When I observe a parasitoid wasp, I look at it from a very technical point of view,” said Paul Breedveld, professor of medical instruments and bio-inspired technology at Delft. “[I]t is a pure mechanism.”

Their new, incredibly thin surgical needle — according to Delft, the thinnest of its kind — has seven individually moving and sliding rods. These rods allow the needle to maneuver just like an ovipositor, pulling themselves along via friction.

“We can already make gentle S-curves, and now we are going to conduct further research on how to make sharper curves,” Breedveld said.

The same motion that allows the wasps to deposit their eggs is then applied in reverse, carrying tissues away.

So far, their vespine needle has been tested on flesh analogues, the CBC reported, not living tissue. They expect, however, that this instrument could one day be used to make surgeries safer and (ironically, given their origin) less painful — as well as delivering life-saving medicine and busting clots. 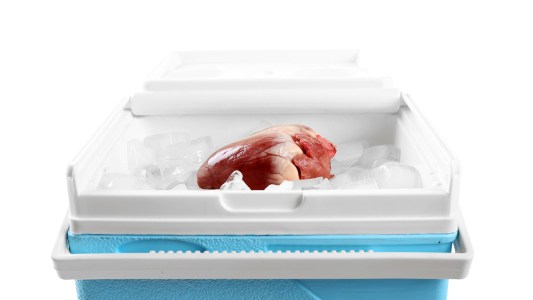 A coating for donor organs that minimized the chance of transplant rejection in mice might one day eliminate the need for immunosuppressants.