Levodopa (L-DOPA) is a tried-and-true treatment for Parkinson’s disease. The molecule is a precursor to dopamine, an important neurotransmitter involved in movement (among myriad other things).

Since debuting as a “miracle drug” in the 1960s, L-DOPA has been a godsend, but its drawbacks have also become clear. While it can restore movement, it also has side effects, including causing uncontrollable movements and a “disturbing” penchant to work off and on, where “the drug suddenly stops, freezing patients almost mid-sentence,” according to Nature.

The issue has been traced to numerous pharmacological issues, among them L-DOPA’s short half-life — it fades out of the body quickly, which makes it hard to hit the right dose throughout the day. Researchers believe that not being able to administer a steady and stable dose of the drug is what’s behind the side effects.

In a creative attempt to provide a steady dose of the drug, researchers have turned to a tiny helper — the humble E. coli bacteria.

The solution, from the lab of Anumantha Kanthasamy, director of the Center for Brain Science and Neurodegenerative Diseases at the University of Georgia, involves genetically engineering bacteria so that they continuously produce L-DOPA in the gut itself.

“After several iterations and improving gut microbiome-based drug delivery technology, we have developed a gut-healthy probiotic bacteria that can produce stable levels of L-DOPA” that can be personalized for the patient, said Piyush Padhi, a doctoral student who gave the presentation.

Keeping it steady: The team successfully tested their engineered L-DOPA bacteria in both mice and dogs.

From inside their guts, the bacteria supplied a stable level of the drug to their blood plasma, devouring a chemical called tyrosine and making L-DOPA with it, Interesting Engineering reports.

That regular plasma level led to steady dopamine levels in their brain — without any of the vexing variation that hamstrings traditional L-DOPA therapy.

When used in a mouse model of Parkinson’s, the bacteria therapy improved motor, cognitive, and mood related tasks.

Researchers believe that not being able to administer a steady and stable dose of the drug is what’s behind the side effects.

The researchers envision the therapy delivered by probiotic pills swallowed once or twice a day. They claim that the amount of L-DOPA the bacteria create can be controlled, both by how much bacteria are swallowed and by consuming a rare sugar called rhamnose, according to New Atlas. Rhamnose is required for turning the tyrosine into L-DOPA.

Next steps: The road from animal to human is treacherous and long as the steeplechase, and a key challenge could be controlling the bacteria. As New Atlas pointed out, keeping doses regular by pills is one thing, but keeping living microbes at the levels you want them is quite another.

The researchers are currently optimizing the L-DOPA bacteria with the intention of beginning human trials. And they believe that Parkinson’s may just be the beginning for this kind of microbial drug delivery system.

“We are currently exploring using this approach to deliver treatments for other conditions such as Alzheimer’s disease and depression,” Kanthasamy said in a statement, and are in the process of getting FDA clearance for clinical testing. 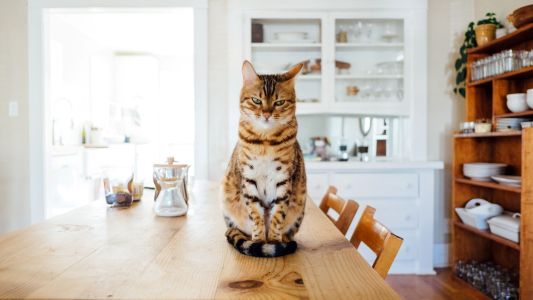 The results of a recent study found that genetically engineering cats could be a solution to eliminating cat allergies.