What greater gift than the love of a cat?” asked Charles Dickens, a man who clearly wasn’t allergic to them. Up to 30% of people suffer from cat allergies, and that number seems to be rising. These individuals endure a range of symptoms, from a slightly stuffy nose to life-threatening asthma. Avoiding cats is the most effective “treatment” option, but that can cause negative psychological effects.

A team of researchers from the Virginia-based biotech company InBio have identified a possible solution: genetically engineer cats to stop producing the most common trigger of cat allergies.

The fur-midable cause of cat allergies: Fel d 1

Over the several decades, scientists have identified eight cat allergens, the molecules that trigger allergies. None, however, are more notorious than Fel d 1. This nasty little protein accounts for up to 96% of human allergic reactions to cats. Cats secrete it though almost every orifice that allows secretions: the mouth, skin, anus, and even their eyes. (Hypothetically, eye contact with a cat could kill a person.) Furthermore, all cats produce Fel d 1 regardless of breed, age, sex, or housing (indoors vs outdoors). In other words, there is no such thing as an allergen‐free cat.

Genome engineering with CRISPR gene editing is a practical approach for tackling cat allergies, as it can selectively inactivate specific genes. However, there is a catch: Fel d 1’s biological function is unknown, and it is rarely a good idea to delete genes when you don’t know what they do.

To determine if Fel d 1 is essential, the researchers at InBio compared the two genes that encode the allergen, CH1 and CH2, in domesticated cats to distantly related exotic cats. When genes are important, they are usually conserved across evolutionary time. That is, if Fel d 1 is essential to a cat’s health, then the genes that encode it should be similar in domesticated cats and exotic cats.

For their domestic cat sample, the researchers used discarded tissue samples (feline testes, ovaries, and uteri) from the spay or neuter procedures of 50 domestic cats. They compared the CH1 and CH2 sequences to those of exotic cat genomes available in the National Center for Biotechnology Information database. The exotic cat species included a subset spanning several lineages of the family Felidae, ranging from members of the same genus as domestic cats to species that diverged from domestic cats around 11 million years ago. The scientists found that CH1 and CH2 sequences vary widely across the groups, suggesting that Fel d 1 is not essential and can therefore be eliminated without causing any health issues.

Next, the scientists developed CRISPR methods to inactivate both CH1 and CH2. These methods were up to 55% efficient at mutating the genes in cells grown in the lab. Additionally, the scientists found no evidence that the method unintentionally edited other genes, which could have nasty consequences to a cat’s health.

“Taken together, our data indicate that Fel d 1 is both a rational and viable candidate for gene deletion, which may profoundly benefit cat allergy sufferers by removing the major allergen at the source,” conclude the authors. Perhaps one day, the elusive hypoallergenic cat will become a reality. 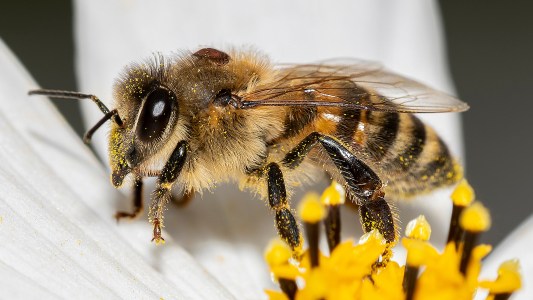 A line of honey bees bred to resist the Varroa mite parasite has proven itself in a large-scale trial involving more than 350 bee colonies.

Agriculture
One breed of honey bee can survive its deadliest threat
Subscribe to Freethink for more great stories
Subscription Center
Sections
Video
Freethink
Subscribe
We focus on solutions: the smartest people, the biggest ideas, and the most ground breaking technology shaping our future.
Subscribe