They look like fever-dream sesame seeds, tipped with ugly fangs and eight tiny legs, perched on blades of grass. And they’re spreading. Deer ticks — the carriers of Lyme disease — are expanding their ranges and bringing their pathogenic passengers with them. Cases of Lyme have been growing for two decades, mostly in the northeast, but also spreading to new regions.

Despite the burden and growing danger, however, there is no human Lyme disease vaccine currently available. That may be about to change, though.

French vaccine company Valneva has a candidate that began its second phase 2 trial in March. With backing from Pfizer, the company hopes it will be the last hurdle before phase 3 efficacy trials, which could finally put a Lyme disease vaccine back on the market.

“The work on a vaccine — we have to,” says Eva Sapi, a Lyme disease expert at the University of New Haven in Connecticut. With ticks spreading unabated, we “have no choice but to work on a vaccine.”

A debilitating disease: Lyme disease is the most common animal-borne infection in the United States, causing up to 476,000 cases per year, according to analysis of insurance data by the CDC.

It can have an extremely long course. Fever, chills, fatigue, head and joint aches can arise days to a month after the initial bite, as well as Lyme’s most famous pathology, a large rash that sometimes takes the shape of a bull’s eye.

Left untreated, however, more serious symptoms can include inflammation of the brain and spinal cord, irregular beating of the heart, and severe head, neck, and joint pain — called Lyme arthritis.

If caught early, most patients respond well to a course of antibiotics. For some patients, however, the impacts of Lyme infection can linger.

Approved in 1998, LYMErix was developed by GlaxoSmithKline (GSK), then known as SmithKline Beecham (SKB).

So what happened? The jab became a casualty of the anti-vaccine movement. Fears of a potential autoimmune reaction that would cruelly cause some of Lyme disease’s very symptoms — including arthritis and chronic fatigue — were seized upon by anti-vaccine groups, despite a lack of evidence that the vaccine caused arthritis.

A year after the Lyme disease vaccine’s approval, a class-action lawsuit was brought against SKB, and the image problem decimated sales. Dropping from over a million sales in 1999 to 10,000 in 2002, SKB eventually dropped the vaccine.

The vaccine targets six different serotypes of Lyme disease. “They looked at different species of Borrelia, including the European species and some other species,” Sapi says. “So this vaccine is a little bit more complex” to cover numerous species.

Taking aim at a protein Borrelia expresses inside ticks, called outer surface protein A, the Lyme disease vaccine sparks antibodies that aim to prevent the nasty spirals from migrating from the tick.

VLA15 has thus far been through multiple phase 2 trials. In October 2020, the companies announced the results of their second phase 2 trial. According to Valneva, the vaccine was “generally safe across all doses and age groups tested,” and sparked an encouraging immune response, including in older adults.

The Lyme disease vaccine’s antibodies worked against all of the serotypes targeted.

Phase 2, round 3: The latest phase 2 study, announced in March of this year, will include 600 healthy participants, Yahoo! Finance reported. The study will include pediatric patients starting from age 5. Participants will be split evenly into a placebo group and two groups that will receive the vaccine on two different dosing schedules, according to BioPharma-Reporter.

Included in the subject population will be people who have previously cleared a Lyme infection, as well as those who have never been exposed to Borrelia.

“This trial initiation marks an important step in the development of VLA15 toward a potential licensure,” Juan Carlos Jaramillo, Valneva’s chief medical officer, said in a statement.

Including children at this stage could pave the way towards their inclusion in a phase 3 trial, which tests for efficacy in the real world, allowing the companies to “potentially offer a vaccine for Lyme disease that may help prevent disease in both adults and children, if approved.”

*We’d love to hear from you! If you have a comment about this article or if you have a tip for a future Freethink story, please email us at [email protected]* 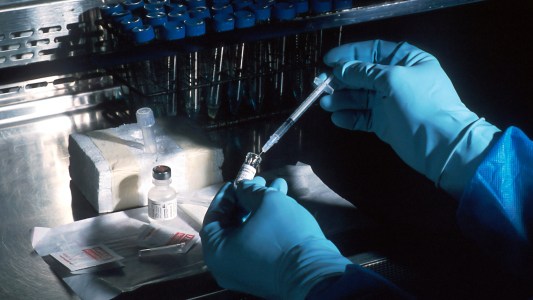 Using a “chimeric” spike protein, researchers have immunized mice against multiple types of coronaviruses with one shot.