Pfizer and French biotech collaborator Valneva have announced the launch of a phase 3 trial for their Lyme disease vaccine. If it is successful, the companies plan on applying for official authorization of the Lyme vaccine in 2025, NPR reported. If granted, it would be the only available human Lyme vaccine.

A Lyme vaccine would be a crucial public health tool against the growing disease. Lyme cases in the US have almost doubled since 1991, as the ticks that carry it spill over into new ranges, driven partly by climate change.

“With increasing global rates of Lyme disease, providing a new option for people to help protect themselves from the disease is more important than ever,” Annaliesa Anderson, head of Vaccine Research & Development and senior VP at Pfizer, said.

Bloodsucking vermin: Lyme disease is the most common animal-borne infection in the US; the CDC estimates that around 476,000 people are diagnosed and treated for Lyme every year, although there is uncertainty about that estimate: some patients are treated presumptively, while other infections may be missed.

In some parts of New England, where the disease was first spotted, more than 15% of the population has antibodies from a Lyme infection.

The infection is caused by a rotini-shaped bacterium, called Borrelia burgdorferi, whose fun-to-say name belies a pretty nefarious disease.

After a person is bitten by an infected tick, the spirally bacteria can take its sweet time getting to work. Initial symptoms, like fever, chills, fatigue, and aches can arise in days or weeks.

These very non-specific symptoms are usually joined by Lyme’s trademark: a rash in the shape of a bullseye. The target-shaped rash is easy to identify, but 20-40% of Lyme cases don’t develop the rash, while others may lack the signature outer ring, making diagnosis difficult.

“With increasing global rates of Lyme disease, providing a new option for people to help protect themselves from the disease is more important than ever.”

If Lyme disease isn’t caught and treated, it can cause irregular heartbeat, severe joint, neck, and head pain, and — in the worst cases — inflammation of the brain and spinal cord.

There hasn’t been a human Lyme vaccine available in the US for 20 years, since a shot produced by SmithKline Beecham (SKB) was discontinued.

A new Lyme vaccine: The new trial, called Vaccine Against Lyme for Outdoor Recreationists (VALOR), will happen across 50 different sites where Lyme disease is “highly endemic” in the US and Europe.

As previously reported by Freethink, the new Lyme vaccine works by aiming for a protein that the bacteria expresses on its outer surface while in ticks.

By blocking that protein target, the Lyme vaccine looks to prevent the bacteria from ever getting out of the tick, thereby staving off infection. The vaccine targets the six most common forms of this protein, sparking an immune response against multiple strains of Lyme.

Pfizer plans to enroll around 6,000 people ages 5 and older in the study. One group of subjects will receive three doses of the Lyme vaccine — with the second and third doses given 2 months and 5-9 months after the first — followed by one booster dose 12 months later. The other group will receive placebo injections instead.

The vaccine’s efficacy will be measured by comparing rates of confirmed Lyme cases in the vaccine and placebo groups, as well as antibody testing to detect cases that may be missed.

The initial run of three shots will be timed to end before Lyme season, which kicks off in late spring, with the booster coming ahead of the next year’s Lyme disease season. The study will be completed by December 31, 2024. 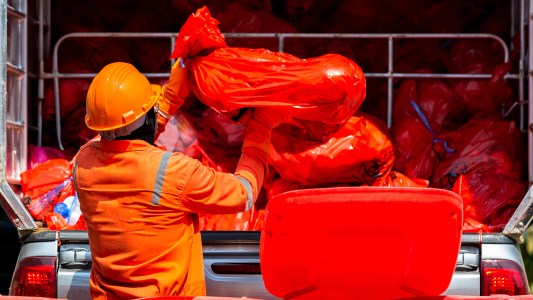 A new hydrogel that wraps around heat-sensitive molecules could help prevent vaccine waste by keeping them viable at higher temperatures.

Medicine
Half of all vaccines are wasted. A gel could save them.
By Kristin Houser
Subscribe to Freethink for more great stories
Subscription Center
Sections
Video
Freethink
Subscribe
We focus on solutions: the smartest people, the biggest ideas, and the most ground breaking technology shaping our future.
Subscribe