An incredibly tiny version of your grooming tool may become a new weapon against bacteria. Alongside German and American partners, researchers at Israel’s Ben-Gurion University (BGU) have developed a set of “molecular tweezers” that take aim at the biofilm that protects bacteria, The Jerusalem Post reports.

“The success of the study in damaging biofilm using molecular tweezers indicates an innovative direction of antibiotic treatments against pathogenic bacteria without concerns of developing resistance,” Raz Jelinek, vice president and dean for research and development at BGU, told the Post.

Antimicrobial armor: A biofilm is formed when a group of cells form a protective barrier on a surface; in the case of bacteria, these biofilms can provide an effective shield from antibiotics, creating a unique, and sometimes dramatic, form of antimicrobial resistance — they don’t go down easy.

A biofilm to pick: Biofilms are made, in part, by tiny fibers. It’s those little support structures that Jelinek, the study lead, and student Ravit Malishev took aim at.

“The tweezers are just like your home tweezers but a million times smaller, and instead of plucking hairs they attack fibers of the bacteria’s biofilm,” Jelinek told Americans for Ben-Gurion University, relayed by EurekAlert!.

In their study, published in Cell Chemical Biology, the researchers turned the tweezers loose on Staphylococcus aureus, the notorious bug behind Staph infections.

The tweezers impact a special peptide that Staph secretes that acts as a biofilm scaffolding, the researchers write. By inhibiting the peptide’s ability to form biofilms, the tweezers weaken and break the biofilm, allowing the immune system and/or antibiotics to take the fight to the Staph, proof-of-concept for molecular tweezers potentially becoming part of our infection-fighting arsenal.

“In fact, this is the first time it has been shown that biofilm formation can be prevented and existing biofilm destroyed by molecular tweezers,” Jelinek told The Jerusalem Post.

It took three years for the researchers to tease out how exactly the molecular tweezers were picking apart the biofilms, Malishev told the Post.

Because the tweezers mechanically attack the biofilm, and not the bacteria itself, the method doesn’t lend itself to evolving resistance.

Getting from here to hospitals: It’s a haul from proof-of-concept against one bacteria — albeit it a common one, which causes lots of problems — and tearing biofilms apart like fashion police on the Met carpet. Jelinek envisions someday people being able to swallow the tiny tweezers, which will then find their way to the biofilm and get to work.

“This breakthrough may open up new ways to fight antibiotic-resistant bacteria,” Malishev said. 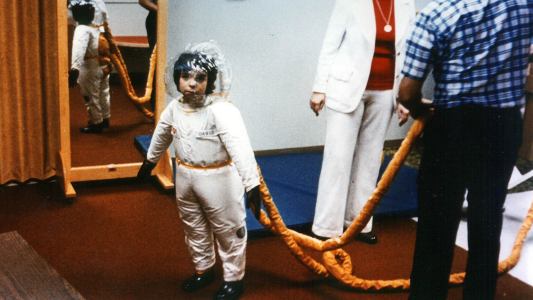 A new gene therapy designed to treat children with ADA-SCID, a form of “bubble boy disease,” was incredibly successful in trials.