In Rwanda, everyone is at risk of catching malaria, spread by the deadly mosquito. To fight back, the country is turning to another buzzing swarm — drones.

The drones are targeting mosquito larvae — spraying anti-mosquito insecticides in areas where the frequency of mosquito-borne illness remains high. The drones are expected to do what it would take hundreds of workers on the ground to accomplish, saving millions of dollars and improving mosquito control.

The problem: Rwanda is located in a malaria-endemic region of Africa. Despite a recent drop in malaria rates — from 4.8 million in 2017 to 1.8 million in 2020, the disease remains a significant health problem. According to the World Health Organization (WHO), malaria continues to be one of the leading causes of illness and death in Rwanda. Nineteen of Rwanda’s 30 districts are prone to malaria epidemics.

Bottom line: the whole Rwandan population is in danger of catching the sickness.

A bold plan: As part of a plan to curb malaria infections by 90% in the next nine years, the country is deploying drones to attack mosquito larvae. The project is a partnership between the government and Charis Unmanned Aerial Solutions, a drone technology company.

The drones are equipped with a tank, pump, and spray nozzles. When the operator flies the drones over regions with the highest malaria prevalence, the propellers’ downward thrust pushes the insecticide down, coating the area, choking out the mosquito larvae.

Without drones, it takes an army of 500 to spray a hectare of land.

Health officials say they are currently using a naturally occurring bacteria found in soil (called Bacillus thuringiensis serotype israelensis, or Bti) as a biological control agent for the mosquito larvae.

The drones will purportedly save the government one to two million dollars per district in staffing, as without drones, it takes an army of 500 to spray a hectare of land, reports the Rwanda Dispatch. The new program, which began last year, costs the country about $60,000.

Progress to date: The plan appears to be working, according to the government. During the pilot phase, from July 2020 to February 2021, the Ministry of Health monitored malaria cases and mosquito larval density. Their Malaria and Neglected Tropical Diseases Report indicates that the average mosquito larvae density reduced dramatically, by 89.6%. And the strategy reduced some types of mosquitoes by as much as 92.8%. The report also shows a 90.6% reduction in malaria incidence in sprayed regions.

The effort couldn’t have waited another year. The COVID-19 pandemic caused disruptions to health services all across the world. According to a WHO survey, during the first quarter of 2021, one-third of countries reported disruptions in malaria prevention and treatment. Lockdowns prevented people from seeking treatment and thwarted the delivery of critical supplies, like insecticides and mosquito nets, reports The New Times. But the mosquitos-killing drones are something to celebrate.

“It’s easy to get an impression of the way drones spraying solutions are changing our daily lives, malaria is no longer a biggest concern here,” Alphonsine Mukakarangwa, a farmer from Bugesera district, told the Rwanda Dispatch. 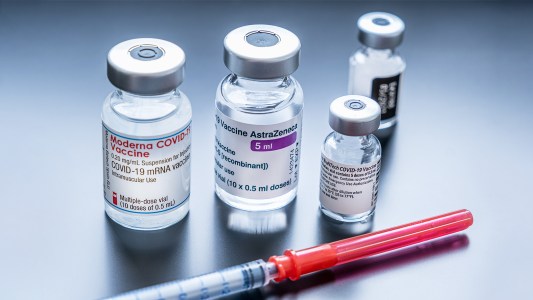 Americans eligible for COVID-19 booster shots no longer need to stick to one brand. Here’s why that’s a big deal.

Coronavirus
You can now mix and match COVID-19 booster shots
By Kristin Houser
Subscribe to Freethink for more great stories
Subscription Center
Sections
Video
Freethink
Subscribe
We focus on solutions: the smartest people, the biggest ideas, and the most ground breaking technology shaping our future.
Subscribe