The first human trial of a new approach to an HIV vaccine has shown promising results, opening the door to a future jab for vaccination’s most vexing enemy. The results also reveal a new framework for potentially staving off other viruses, like dengue, hepatitis C, and influenza, too.

The treatment — a kind of pre-vaccine vaccine — targeted and then turned on a very rare, special type of immune cell, known as “naive B cells,” making them capable of producing broadly neutralizing antibodies (bnAbs), according to Scripps.

After receiving the treatment, 97% of volunteers had these naive B cells activated.

“This study demonstrates proof of principle for a new vaccine concept for HIV, a concept that could be applied to other pathogens, as well,” William Schief, an immunologist at Scripps Research and executive director of vaccine design at IAVI’s Neutralizing Antibody Center, said in the release.

The trial did not yet test an actual HIV vaccine — but it identified how we may finally be able to make one that works. In the next phase, Scripps is partnering with Moderna to create an mRNA version of their vaccine that could work even better.

Broadly neutralizing antibodies are potent but scarce, and have been “pursued as a holy grail in HIV for decades,” as European Pharmaceutical Review puts it.

As their name suggests, bnAbs aren’t tailored to just one specific form of HIV-1, the virus behind AIDS. Instead, they are capable of destroying many different forms of the virus, however it mutates.

According to AVAC, four of the rare broadly neutralizing antibodies were discovered in the 1990s, with dozens since identified that attack numerous targets on the virus.

The “broadly” part is key here, because HIV has proven enormously difficult to vaccinate against. It’s not too hard to get antibodies against one iteration, but the virus has an ability to mutate that’d make influenza envious — rapidly altering its coat of proteins to slip past the defenses of the very immune system it is attacking.

While antiretroviral therapy (ART) has turned the virus from killer to chronic disease — and can even suppress it enough to prevent transmission — said therapies need to be performed daily, and the virus will come roaring back if you let up.

While a new wave of studies are looking to make better HIV prevention drugs or turning to CRISPR in the hopes of creating a cure (with promising results against the virus’ monkey relative, SIV), a true vaccine remains unavailable.

With their ability to bind to multiple targets, on multiple forms of HIV, however, broadly neutralizing antibodies may be the key to finally making the shot. But to get them, the immune system needs to first produce the naive B cells that can crank them out.

“One in a Million”

The immune system is an impossibly complex coalition of proteins and cells — all kinds of T cells, B cells, antibodies, interferons, and more — doing their damndest to eliminate any threats they see.

B cells, among other things, create antibodies. These antibodies then attach themselves to the virus they’re meant to fight, either marking it for other immune defenders or neutralizing it outright.

“We and others postulated many years ago that in order to induce bnAbs, you must start the process by triggering the right B cells — cells that have special properties giving them potential to develop into bnAb-secreting cells,” Schief said.

Specifically, the Scripps/IAVI team wanted to target B cells that have not been exposed to a pathogen — naive B cells — and thus become differentiated. Even then, the team needed to find ones with very special properties that would allow them to create broadly neutralizing antibodies.

“To get the right antibody response, we first need to prime the right B cells,” said Schief. “In this trial, the targeted cells were only about one in a million of all naïve B cells.”

Finding these specific naive B cells is a process known as “germline-targeting,” as the B cell’s antibodies are created by unmutated, or germline, genes.

Their trial enrolled 48 healthy adults, half receiving a placebo, and half receiving two courses of the vaccine compound (and an adjuvant made by GSK) to target the naive B cells. Nearly the entire treatment group had the right naive B cells activated.

“The data from this trial,” Schief concluded, “affirms the ability of the vaccine immunogen to do this.”

Where We Go Now

Broadly neutralizing antibodies aren’t necessarily a silver bullet. As Poz reported on a bnAb trial against HIV in January, even “broad” doesn’t mean covering most strains of HIV. While one specific bnAb (VCR01) had no effect against most strains of the virus, for the ones it did, new cases dropped by 75%.

“This is the first study to demonstrate the concept that bnAbs can prevent acquisition of infection,” lead investigator Lawrence Corey said during a press conference, according to Poz. Which means that we’re “going to need cocktails of antibodies. Maybe that shouldn’t be surprising, since we’ve needed cocktails of drugs (for treatment).”

Successfully priming naive b cells provides “a roadmap to accelerate further progress toward an HIV vaccine,” Julie McElrath, of the Fred Hutchinson Vaccine and Infectious Disease Division and a lead investigator in the trial, said.

Scripps also announced that, “As a next step, IAVI and Scripps Research are partnering with the biotechnology company Moderna to develop and test an mRNA-based vaccine that harnesses the approach to produce the same beneficial immune cells.”

Because mRNA can be reprogrammed so easily, they believe it will significantly speed up the pace of research, as new versions can be rapidly created for testing in the lab.

And the hope is that the technique will prove useful against other viruses and pathogens as well, including influenza, dengue, hepatitis C — as well as another avenue for developing a malaria vaccine, a vaccinologist’s fever dream.

“This clinical trial has shown that we can drive immune responses in predictable ways to make new and better vaccines, and not just for HIV,” Scripps’ Dennis Burton said in the release.

“We believe this type of vaccine engineering can be applied more broadly, bringing about a new day in vaccinology.”

Editor’s note: This article was edited on 4/13/21 to more accurate reflect the study. Naive B cells were targeted and then activated, not created, by the vaccine compound. 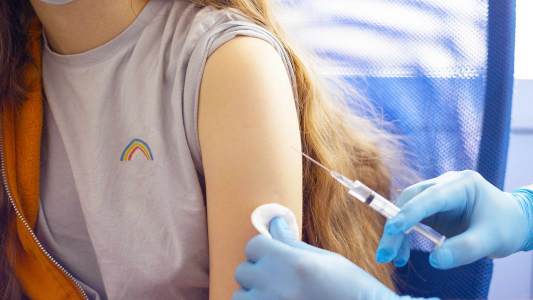 Pfizer’s COVID-19 vaccine was reportedly 100% effective in a trial involving more than 2,000 adolescents between the ages of 12 and 15.