There are currently few good treatment options for glioblastoma, an aggressive type of brain cancer with a high fatality rate. One reason that the disease is so difficult to treat is that most chemotherapy drugs can’t penetrate the blood vessels that surround the brain.

A team of MIT researchers is now developing drug-carrying nanoparticles that appear to get into the brain more efficiently than drugs given on their own. Using a human tissue model they designed, which accurately replicates the blood-brain barrier, the researchers showed that the particles could get into tumors and kill glioblastoma cells.

Many potential glioblastoma treatments have shown success in animal models but then ended up failing in clinical trials. This suggests that a better kind of modeling is needed, says Joelle Straehla, the Charles W. and Jennifer C. Johnson Clinical Investigator at MIT’s Koch Institute for Integrative Cancer Research, an instructor at Harvard Medical School, and a pediatric oncologist at Dana-Farber Cancer Institute.

“We are hoping that by testing these nanoparticles in a much more realistic model, we can cut out a lot of the time and energy that’s wasted trying things in the clinic that don’t work,” she says. “Unfortunately, for this type of brain tumor, there have been hundreds of trials that have had negative results.”

Straehla and Cynthia Hajal SM ’18, PhD ’21, a postdoc at Dana-Farber, are the lead authors of the study, which appears this week in the Proceedings of the National Academy of Sciences. Paula Hammond, an MIT Institute Professor, head of the Department of Chemical Engineering, and a member of the Koch Institute; and Roger Kamm, the Cecil and Ida Green Distinguished Professor of Biological and Mechanical Engineering, are the senior authors of the paper.

Several years ago, Kamm’s lab began working on a microfluidic model of the brain and the blood vessels that make up the blood-brain barrier.

Because the brain is such a vital organ, the blood vessels surrounding the brain are much more restrictive than other blood vessels in the body, to keep out potentially harmful molecules.

To mimic that structure in a tissue model, the researchers grew patient-derived glioblastoma cells in a microfluidic device. Then, they used human endothelial cells to grow blood vessels in tiny tubes surrounding the sphere of tumor cells. The model also includes pericytes and astrocytes, two cell types that are involved in transporting molecules across the blood-brain barrier.

While Hajal was working on this model as a graduate student in Kamm’s lab, she got connected with Straehla, then a postdoc in Hammond’s lab, who was interested in finding new ways to model nanoparticle drug delivery to the brain. Getting drugs across the blood-brain barrier is critical for improving treatment for glioblastoma, which is usually treated with a combination of surgery, radiation, and the oral chemotherapy temozolomide. The five-year survival rate for the disease is less than 10 percent.

Hammond’s lab pioneered a technique called layer-by-layer assembly, which they can use to create surface-functionalized nanoparticles that carry drugs in their core. The particles that the researchers developed for this study are coated with a peptide called AP2, which has been shown in previous work to help nanoparticles get through the blood brain barrier. However, without accurate models, it was difficult to study how the peptides helped with transport across blood vessels and into tumor cells.

When the researchers delivered these nanoparticles to tissue models of both glioblastoma and healthy brain tissue, they found that the particles coated with the AP2 peptide were much better at penetrating the vessels surrounding the tumors. They also showed that the transport occurred due to binding a receptor called LRP1, which is more abundant near tumors than in normal brain vessels.

The researchers then filled the particles with cisplatin, a commonly used chemotherapy drug. When these particles were coated with the targeting peptide, they were able to effectively kill glioblastoma tumor cells in the tissue model. However, particles that didn’t have the peptides ended up damaging the healthy blood vessels instead of targeting the tumors.

“We saw increased cell death in tumors that were treated with the peptide-coated nanoparticle compared to the bare nanoparticles or free drug. Those coated particles showed more specificity of killing the tumor, versus killing everything in a nonspecific way,” Hajal says.

The researchers then tried delivering the nanoparticles to mice, using a specialized surgical microscope to track the nanoparticles moving through the brain. They found that the particles’ ability to cross the blood-brain barrier was very similar to what they had seen in their human tissue model.

They also showed that coated nanoparticles carrying cisplatin could slow down tumor growth in mice, but the effect wasn’t as strong as what they saw in the tissue model. This might be because the tumors were in a more advanced stage, the researchers say. They now hope to test other drugs, carried by a variety of nanoparticles, to see which might have the greatest effect. They also plan to use their approach to model other types of brain tumors.

“This is a model that we could use to design more effective nanoparticles,” Straehla says. “We’ve only tested one type of brain tumor, but we really want to expand and test this with a lot of others, especially rare tumors that are difficult to study because there may not be as many samples available.”

The researchers described the method they used to create the brain tissue model in a recent Nature Protocols paper, so that other labs can also use it.

Healthcare
What’s causing the alarming rise in cancer for adults under 50?
A new review finds that 14 different cancers, including eight related to the digestive system, are increasing in people under age 50.
Up Next 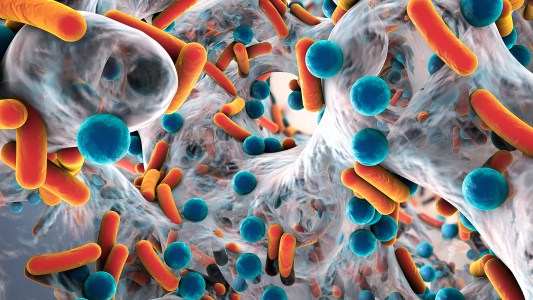 A team at ETH Zurich has modified E. coli to work like biological recorders of the processes of the gut.

CRISPR
CRISPR can create a “captain’s log” for bacteria traveling through the microbiome
Subscribe to Freethink for more great stories
Subscription Center
Challenges
Video
Freethink
Subscribe
We focus on solutions: the smartest people, the biggest ideas, and the most ground breaking technology shaping our future.
Subscribe