A survivor of the 2014-2016 Ebola outbreak in Guinea is likely to have begun the latest outbreak of the virus, according to a recent genetic report.

Based on genetic sequencing of the current outbreak’s virus samples, the report suggests that the Ebola virus stayed alive in an unknown survivor for at least five years after being infected — presumably long after symptoms had vanished.

They ultimately spread it to someone else. Until now, the record for the longest an Ebola survivor might have shed the virus was only 500 days.

Genetically, the viruses from both outbreaks are nearly identical, meaning that the second outbreak did not spread from animals to humans, as scientists had thought.

“I was completely shocked,” Angela Rasmussen, a virologist with Georgetown University in Washington, D.C., told STAT.

The previous Ebola outbreak in West Africa infected over 28,000 people, killed over 11,000, and left thousands of survivors, some of whom were already being shunned due to disease fears. The possibility that those who survived could be contagious for years could stigmatize them further, reports New York Times.

The Ebola outbreak in Guinea lasted until 2016. Then, in late January of this year, new cases began to emerge. After three people tested positive for the virus, the Guinean health officials declared it an outbreak on February 13.

Given the long time between the two outbreaks, scientists assumed a new Ebola virus must have jumped from its reservoir in bats. However, in the analysis, researchers compared genetic sequences from the current epidemic with sequences from viruses obtained during the West African Ebola outbreak.

They found that four viruses from people infected in the recent Ebola outbreak were closely related to viruses from 2014 — with only about a dozen different mutations. If the virus had continued to transmit, then scientists would expect to see more than 100 genetic mutations over that time. Therefore, this suggests that the new outbreak did not start from a virus in an animal. Instead, they believe it has been hiding, dormant in a human body, and was transmitted by a survivor of the last Ebola outbreak.

The report results are shocking because scientists believe the virus is generally carried and spread by animals, often bats or nonhuman primates.

“It’s a stunner,” William Schaffner, a Vanderbilt University infectious disease expert who was not involved in the research, told The New York Times. “This is an extraordinary phenomenon.”

The Ebola virus was first found in 1976 along the Ebola River in the Democratic Republic of Congo. It has since reemerged regularly, infecting many people and killing an extremely high share — often a third to half, or more.

In February 2021, the Congo also declared an Ebola outbreak, but it is unrelated to the one in West Africa. Between both countries, 29 cases and 13 deaths had been reported as of March 6.

The discovery could mean that the other outbreaks, once thought to have started with an animal transmission, were actually started by survivors with long-lasting infections.

Ebola vaccines, such as those created by Merck and Johnson & Johnson, have only been used to contain an ongoing Ebola outbreak, thus far. But Schaffner suggested to the New York Times that this discovery may point to the need to “to vaccinate much of equatorial Africa,” even in the absence of an outbreak, in order to prevent more flare-ups.

Scientists are now concerned that this could happen with other viruses because a virus can hide from the immune system in specific parts of the body, known as “privileged sites.” They are like safe zones that the body’s immune system can’t reach. No one knows how long a virus can stay there.

“We have no idea how often this may be happening,” Schaffner told New York Times. “Some studies are underway. As you can imagine, it’s not easy to study hiding viruses in immunologically privileged sites, like the testicles, the eye, and, rarely, the central nervous system. Those are not accessible places for easy study.” 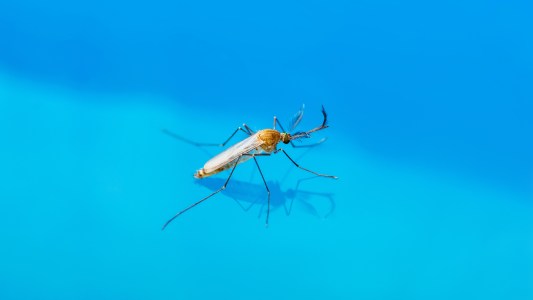 A mosquito protein that targets the viral envelope of flaviviruses, inhibiting their activity, could help doctors treat several life-threatening diseases.