A newborn’s wails are a welcome sound in the delivery room — doctors know that crying is a fast way to get air into lungs and start the breathing process.

However, there’s a lot about newborn breathing they don’t know, including what’s actually happening in a baby’s lungs during those first critical moments of life.

Now, a new imaging technology is pulling back the curtain — and it has the potential to save infants’ lives.

In the womb, a baby’s lungs are full of liquid, and oxygen is delivered via the mother’s placenta.

During birth, the baby’s body absorbs most of this liquid. Its first cries then fill the lungs with air and push out the last of the liquid, in a process called “lung aeration.”

“It’s really like a big bang for the baby,” researcher David Tingay told Australia’s ABC News. “If the lungs don’t fill with air and get that oxygen in, all the other organs can’t kick off and start doing what they need to do.”

Most babies act like aeration is something they were born to do (which they really were), but about 10% of newborns and almost all preterm infants have trouble with it.

When that happens, doctors can perform a medical intervention known as “resuscitation.” This can range from using a bulb syringe to remove excess liquid from the infant’s lungs to intubating the baby, so that a mechanical ventilator can breathe for them.

Resuscitation can save a baby’s life, but it can also potentially cause harm — intubation, for example, can damage a baby’s airways and increase their risk of infection. So it’s vital that doctors know when to step in, but also what level of help is needed.

That can be difficult. The need for resuscitation is determined primarily through observation — a doctor notices that a baby is having trouble breathing and decides to start intervening.

Now, Tingay and his collaborators have developed a new technique that takes some of the guesswork out of resuscitation, by showing doctors exactly what a healthy newborn’s lungs look like during its first minutes of life.

The new technique centers on an existing imaging technology called electrical impedance tomography (EIT). This technology is non-invasive and radiation-free — two characteristics that make it ideal for use in newborns.

To use it to study newborn breathing, a custom-built silk belt containing electrodes is placed around the baby’s chest. Imaging data collected by the electrodes is then combined with audio and video recordings of the newborn to get a full picture of their first breaths.

“This technology allows us to do something we’ve not been able to do before, which is to really see how every single breath the baby takes after they’re born is adapting to that process of being an independent person outside of their mother’s womb,” Tingay said.

In a recently published study, the researchers recorded more than 1,400 individual breaths from 17 healthy babies, starting from less than 30 seconds after they were born.

From this data, they were able to learn new insights into newborn breathing, including the fact that babies favor their right lungs more than their left immediately after birth and the rate at which they move from crying to more regular tidal breathing.

“Improving interventions in the delivery room first requires understanding the processes that define success and failure of breathing at birth,” Tingay said. “This study has significantly reduced that knowledge gap.”

Eventually, the technique could replace — or at least supplement — observation as the standard way to track newborn breathing. Doctors might wrap a belt around each baby’s chest and use the data to monitor for signs that intervention is needed.

Tingay is also researching whether it could be used with preterm babies to predict who will eventually develop lung problems, giving doctors a chance to intervene sooner than is currently possible.

It’s really like a big bang for the baby.

“It took doctors about a month to get a full picture of just how little and underdeveloped Milly’s lungs were,” Joanna Bezette, whose preterm daughter suffers from chronic lung disease, said in the press release.

“To have imaging technology that can detect quickly whether there is (a) problem with a newborn’s lungs — and that’s also not invasive — will be of such great comfort (to other families),” she added. 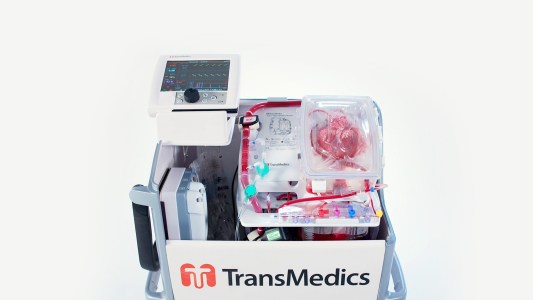 For the first time, TransMedics’ “heart in a box” machine has been used to help children in need of heart transplants, with great success.