The challenge: Almost every baby born in the US undergoes a newborn hearing screening before they even leave the hospital. This can ensure any hearing loss is identified early, helping the child avoid speech, social, and school delays that can accompany late detection.

Many low-income countries don’t have newborn hearing screening programs, though. Children in those places are an average of 2.5 to 3 years old by the time their hearing impairments are detected, compared to an average age of 2 to 3 months in high-income nations.

“There is a huge amount of health inequity in the world,” said Shyam Gollakota, a professor at the University of Washington. “I grew up in a country where there was no hearing screening available, in part because the screening device itself is pretty expensive.”

The idea: To help end this inequality, Gollakota and his colleagues have developed a newborn hearing screening device using a pair of off-the-shelf earbuds, a microphone, and a basic smartphone — and it performed just as well as commercial devices in a clinical study.

“The project here is to leverage the ubiquity of mobile devices people across the world already have — smartphones and $2 to $3 earbuds — to make newborn hearing screening something that’s accessible to all without sacrificing quality,” said Gollakota.

How it works: Commercial screening devices use speakers to send two tones into a newborn’s ear simultaneously. If the newborn can hear the tones, the hair cells in their inner ear will vibrate, producing a third tone that the device can detect.

The cost of speakers that can play two tones simultaneously without any interference is one of the reasons commercial devices are so expensive, but the UW team found that they could replicate that ability by connecting two earbuds playing different tones to a probe.

“These algorithms can run in real time on any smartphone.”

This probe, designed to fit inside a newborn’s ear, also contains a microphone. When the tones are played, the microphone can then pick up any sounds from the newborn’s ear and send them to a smartphone for processing.

“As you can imagine, these sounds that are coming out from the ear are very soft, and sometimes it’s hard to hear them over noise in the environment or if the patient is moving their head,” said lead author Justin Chan.

“We designed algorithms on the phone that help us detect the signal [the third tone] even with all that background noise,” he continued. “These algorithms can run in real time on any smartphone and do not require the latest smartphone models.”

The device was tested in a clinical trial involving 201 ears belonging to people ranging in age from 1 week to 20 years, including 52 babies up to 6 months old — and it performed just as well as a commercial device and correctly identified all 66 ears with hearing loss.

While commercial newborn hearing screening devices cost thousands of dollars, according to the researchers’ paper, the materials for their device cost just $10, and second-hand smartphones can be purchased for $35 to $50 in low- and middle-income countries.

Looking ahead: UW has now teamed up with people at the University of Nairobi and the Kenya Ministry of Health to create the TUNE project (“Toward Universal Newborn and Early Childhood Hearing Screening in Kenya”), with the goal of putting their device into practice in Kenya.

“Right now, this is a prototype that we created,” said Chan. “The next challenge is really scaling this up and then working with local experts in each country who are the most familiar with the particular challenges in each situation.”

“We have an opportunity to really have an impact on global health, especially for newborn hearing,” he continued. “I think it’s pretty gratifying to know that the research we do can help to directly solve real problems.” 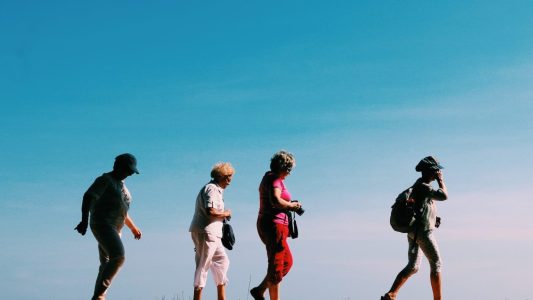 To avoid one of the worst side effects of aging—bone, joint, and muscle pain—we might need to exercise a lot harder and more often.

Aging
To avoid the worst effects of aging, we might need to exercise harder than we thought
Subscribe to Freethink for more great stories
Subscription Center
Sections
Video
Freethink
Subscribe
We focus on solutions: the smartest people, the biggest ideas, and the most ground breaking technology shaping our future.
Subscribe