Norovirus, sometimes called “stomach flu” or the “winter vomiting bug,” infects 20 million Americans a year, making it the number one cause of food poisoning and one of the most common infectious diseases in the U.S.

The disease is miserable, and the virus is extremely contagious. In spite of this, there’s no treatment and no norovirus vaccine. The virus has dozens of strains, which are all constantly mutating, and it provokes only short-term natural immunity.

It’s a nearly impossible target for a vaccine.

But now, researchers at Vanderbilt and Baylor College of Medicine have identified antibodies that shut down a broad range of norovirus strains that have long vexed vaccine efforts.

“We were surprised to find naturally occurring antibodies that recognized so many different noroviruses,” James Crowe Jr, professor of Pediatrics and Pathology, Microbiology & Immunology at Vanderbilt University Medical Center, said in a release.

“Previously, many experts thought that this would not be possible because of the extreme sequence diversity in the various groups and types of noroviruses in circulation. The human immune system continues to surprise us in its capacity to recognize diverse virus variants.”

Nasty norovirus: Looking like a buzz-cut coronavirus, norovirus is a fiendishly infectious pathogen, which takes aim at the gastrointestinal tract.

According to the CDC, the virus spreads easily and quickly from people and tainted foods/surfaces, leaving excretory havoc in its wake: nausea, vomiting, diarrhea, and stomach pain are all hallmarks of norovirus. It can be washed down the drain, but it’s very hard to kill with disinfectants.

As the leading cause of foodborne illness in the U.S., the CDC estimates that norovirus sends 19-21 million genuflectors to the porcelain throne per year, even killing around 900 people.

So, yeah, a norovirus vaccine would be pretty nice.

Norovirus is the #1 cause of food poisoning, sending about 20 million Americans scrambling for the bathroom per year.

Unfortunately, this is easier said than done. The virus is “constantly evolving, evoking limited immunity, and only moderately virulent, allowing most of those infected to fully recover, thereby maintaining a large susceptible pool of hosts,” the CDC’s Aron J. Hall wrote in The Journal of Infectious Diseases.

For him, norovirus may even lay claim to the title of “perfect human pathogen.” (One imagines this is a hotly contested award in viral circles.)

Towards a norovirus vaccine: The key to a good vaccine is finding antibodies that can neutralize a broad range of different virus strains. Once you know what you need to create, you can design a vaccine to prod the immune system into creating enough of it to stop the infection.

But norovirus is almost impossible to study, because it won’t grow in the lab. Before they could do anything to make a vaccine, researchers at Baylor College of Medicine had to invent a way to grow the virus outside of the body (because, uh, growing it inside is no fun).

Then in 2018, according to the Knoxville News Sentinel, they joined with Vanderbilt to harvest white blood cells from people who recently had a norovirus infection. These immune cells would normally die off, but Vanderbilt has a technique to fuse them with cancer cells, which allows them to keep growing indefinitely.

“Two inventions just happened around the same time,” Crowe told the News Sentinel. “We put the two together.”

By pitting Baylor’s lab-grown viruses against Vanderbilt’s cloned immune cells, the team could simulate infections and generate a ton of antibodies in the lab — which they can sort through to find the perfect weapon against norovirus.

Stomach flu kryptonite: The newly identified antibodies, reported in Nature Communications in July, recognize numerous types of noroviruses. Pulling from subjects with a history of acute gastroenteritis, the researchers were able to identify a panel of monoclonal antibodies.

These antibodies take aim at part of the virus that is common to all of the different strains and rarely mutates — a slower moving target that could be a good candidate for a norovirus vaccine.

“It is exciting to now have human monoclonal antibodies that neutralize many norovirus variants,” Mary Estes, professor of virology at Baylor College, said in the release.

In addition to helping identify norovirus vaccine candidates, the monoclonal antibodies could potentially be used directly to prevent or treat norovirus infection, the researchers say. 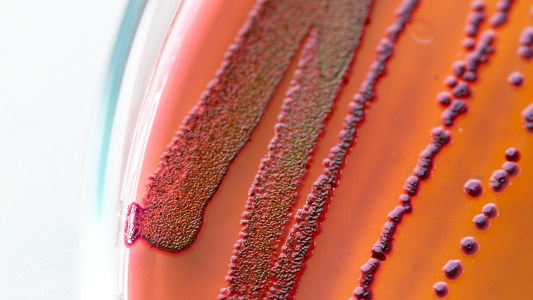 A new vaccine platform based on biomaterial may eventually provide rapid protection against multiple bacterial threats.

Medicine
Harvard has a vaccine against septic shock
By B. David Zarley
Subscribe to Freethink for more great stories
Subscription Center
Sections
Video
Freethink
Subscribe
We focus on solutions: the smartest people, the biggest ideas, and the most ground breaking technology shaping our future.
Subscribe