Researchers at Harvard have created a vaccine that could prevent sepsis — an extremely serious condition that can be caused by a host of bacteria.

The CDC estimates that sepsis kills 270,000 people in the U.S. every year; one in three deaths in a hospital is related to sepsis.

Sepsis is hard to prevent because it can be triggered by any kind of infection, in almost any organ — but especially the kind that are common in hospitals. The immune system overreacts to the infection, causing systemic damage to the body. Antibiotics can help if given early, but 15% of cases still end in death, according to the CDC.

The vaccine platform is unique in its ability to spark broad-spectrum immunity against a host of bacteria. Besides combating sepsis, it could be used in veterinary medicine and as a rapid response to new pandemics and biowarfare.

“The protective powers of the vaccines that we have designed and tested so far and the immune responses they stimulated are extremely encouraging,” said David Mooney of Harvard’s Wyss Institute.

Antibiotics are failing: Humanity is in danger again. Our carpet bombing of bacteria with antibiotics has led to the development of superbugs, bacteria resistant to all of our best drugs. Infection by these superbugs — especially common in hospitals — can be lethal.

While vaccines would normally be our best bet against infectious disease — eliminating both the need for antibiotics and the evolution of superbugs — “for the most common bacterial pathogens that cause sepsis and many other diseases, still no vaccines are available,” the Wyss Institute points out.

Rather than just vaccinating against one bacteria strain at a time, the vaccine works kind of like Batman, tying up whatever crooks it finds and then turning them over to immune police, who can then mop up the rest of the gang.

The vaccine uses a sticky protein found in human blood, which can glom onto a “huge variety of pathogens,” reports Medgadget. According to Wyss, this bacteria-capturing gunk “binds to numerous pathogens from all microbial classes (Gram +/- bacteria, fungi, viruses and parasites) as well as many toxins.”

The sticky stuff gets combo’d with a biomaterial scaffolding, which recruits special immune system cells called dendritic cells. These cells are the “sentinels” of the immune system; they are responsible for telling the immune system’s specialized cells (antibodies, B cells, etc.) what to hunt for.

When injected or implanted under the skin, ciVAX uses the sticky proteins to snag “a much larger spectrum of potential antigens than vaccines consisting of single or mixtures of recombinant antigens,” said Wyss’s Michael Super.

After capturing a host of potential bad guys, the sticky vaccine platform pulls in the dendritic cells and activates them. Those cells, now waving a mugshot of the bacteria that’s been snagged, then head for the lymph nodes, where they put the whole immune system on alert — a body-wide APB/BOLO for whatever pathogen the vaccine has caught.

“Most bacterial vaccines work for a subset of bacterial strains or require the modification of the antigen or isolation of the pathogen before vaccine development,” the researchers wrote in Nature Biomedical Engineering. But ciVAX, by hoovering up multiple antigens at once and training the immune system on them, can protect against a variety of infections.

One in three deaths in hospitals are related to sepsis.

To test their vaccine, the researchers turned to those scientific stalwarts: mice and pigs. When armed with targets from infected animals, the vaccine protected mice from MRSA skin infections, and protected both mice and pigs from a deadly dose of E. coli — which normally would have caused lethal septic shock.

Not only were the ciVAX’d animals protected from one type of deadly E. coli, their study found that the vaccine also provided cross-protection against other vicious strains. This gives the researchers hope that it could provide broad protection against a host of potentially deadly, sepsis-causing bacteria.

Biomaterial bulwark: While it’s still early days — it’s a long way to go from mice and pigs to people — the researchers believe ciVAX, with its broad-spectrum immunity abilities, may be an ideal weapon against bacterial pandemics and biothreats.

The biomaterial base is also shelf-stable and able to be manufactured in advance.

“The complete vaccines can then be assembled in less than an hour once the antigens are available, which gives this technology unique advantages over other vaccine approaches when rapid responses are called for,” Super said. 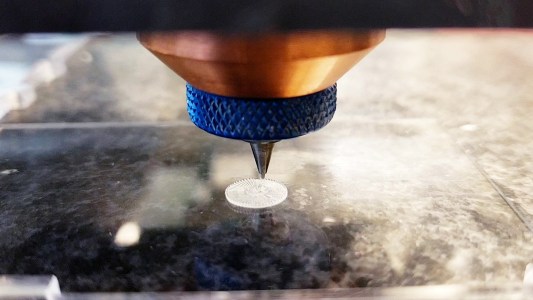 Researchers at Harvard have developed a 3D-printed graft they hope will make ruptured eardrum surgeries safer, faster, and more effective.

Surgery
This 3D-printed graft may improve ruptured eardrum surgery
By B. David Zarley
Subscribe to Freethink for more great stories
Subscription Center
Sections
Video
Freethink
Subscribe
We focus on solutions: the smartest people, the biggest ideas, and the most ground breaking technology shaping our future.
Subscribe