Ohio’s vaccine lottery initiative seems to be working as hoped, with the state experiencing a 33% increase in new COVID-19 vaccinations the week following its announcement.

The challenge: As of May 11, fewer than 5 million Ohioans had received at least one dose of a COVID-19 vaccine, meaning nearly 60% of the state’s population was still unprotected.

The number of shots the state was administering daily had also been trending downward for a month, prompting Ohio Governor Mike DeWine to announce a plan that, at the time, seemed a little out there: a lottery giving five vaccinated Ohioans $1 million each.

Vax-a-Million: They called the campaign Vax-a-Million, and all adult residents of the state are eligible to win the money — so long as they’ve received at least one vaccine dose by the day of the drawing.

Ohio’s vaccine lottery also includes an incentive for residents between the ages of 12 and 17. Along with the cash prizes, the state is giving away five full scholarships — four years of tuition, books, and room and board — to Ohio universities.

The state will announce the first Vax-a-Million winners on May 26, and new winners will be announced every Wednesday until June 23.

New interest: The week before DeWine announced Ohio’s vaccine lottery, about 90,000 Ohioans over the age of 16 received either Johnson and Johnson’s one-dose COVID-19 vaccine or the first dose of either Pfizer or Moderna’s vaccines.

Happy governor: Ohio doesn’t ask people why they’re getting a vaccine when they show up for a shot, but DeWine appears confident that Vax-a-Million played a role in getting more people to vaccine clinics.

“We knew that for us to really get out of this pandemic and to move forward, we needed to have more people vaccinated, and we made the decision to try this,” he told the press on May 24. “I’m more than happy — very, very happy — with the results.”

There has been a lot more excitement about vaccines.

The pushback: Jena Powell, a Republican member of the Ohio State House of Representatives, is drafting a bill to block the vaccine lottery, which she called a “gross misuse of taxpayer dollars” during an interview with CNN.

That criticism hasn’t seemed to deter DeWine one bit, though.

“I respectfully disagree with her,” he said. “She certainly is entitled to her opinions, but I think the facts show that once we put this in place, there has been a lot more excitement about vaccines, and we’ve seen vaccines go up.”

“(T)hat will save lives,” he added. “That will help get us back, moving forward, at a faster rate.”

The big picture: Several other states, including New York, Maryland, and Oregon, announced their own vaccine lotteries within days of DeWine’s announcement.

Now that there’s some evidence that the approach may actually work, we could see even more states using big cash prizes as an incentive for shots — and hopefully, a subsequent increase in vaccinated Americans. 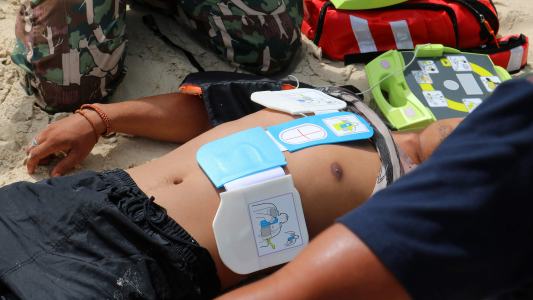 Public Health
Can an app save cardiac arrest victims before EMS arrives?
By B. David Zarley
Subscribe to Freethink for more great stories
Subscription Center
Sections
Video
Freethink
Subscribe
We focus on solutions: the smartest people, the biggest ideas, and the most ground breaking technology shaping our future.
Subscribe