In total, nearly 50,000 Americans will die from pancreatic cancer this year, and while that doesn’t rank it among the most common cancers, it is one of the most deadly — the five-year survival rate is less than 10%.

Doctors often use the blood vessels going into a tumor to deliver chemotherapy drugs to it, but pancreatic tumors have a limited blood supply, so that’s not a viable option.

The tumors are also surrounded by a dense connective tissue (stroma) that serves as a barrier into it, and each pancreatic cancer cell is covered in a network of protective molecules.

In other words, each tumor is like a fortress, but researchers at Boston Children’s Hospital are developing a promising pancreatic cancer treatment that may be able to penetrate them — and avoid damaging healthy cells in the process.

The first is an antibody, a type of immune system protein that can spot and latch on to a specific target. The antibody the researchers are using for their new pancreatic cancer treatment goes straight for one of those molecules found on pancreatic tumor cells, called ICAM1.

The second part is mertansine, a chemotherapy drug used to treat other types of cancers.

Combined, they form a new type of therapy known as an antibody-drug conjugate (ADC). These are gaining favor with cancer researchers as they provide the precision of an antibody, but with the extra potency of a chemotherapy drug.

Attaching their cancer drug to an antibody ensures that it only kills the tumor cells.

In other words, by attaching their cancer drug to an antibody that would only target ICAM1, the researchers could ensure the drug would kill only the tumor cells and not the healthy cells in the body.

The ultra-tiny antibody is the ideal delivery vehicle for the drug, too, according to researcher Peng Guo.

“The size of the ADC is similar to the size of a single antibody: less than 10 nanometers,” he said in a press release. “Because of this ultra-small diameter, it can penetrate the stroma and reach pancreatic tumor cells better than other novel treatments such as T-cell immunotherapy or nanomedicines.”

The Chemotherapy of the Future

Each mouse received one of four treatments: the new ADC, mertansine attached to a non-targeting antibody, a different chemo drug often used to treat pancreatic cancer, or a sham treatment.

After just two doses, the mice that received the new ADC saw a significant reduction in the size of their tumors compared to the other mice. The treatment also inhibited the cancer’s spread to other organs, according to the researchers, and didn’t appear to damage healthy cells.

As a last step in the study, the researchers developed a new imaging technique to spot ICAM1 on cancer cells.

That would eliminate the need for a biopsy to confirm the molecules’ presence prior to administering the ADC therapy, as well as give doctors a way to monitor the treatment’s effect over time.

Before the pancreatic cancer treatment can even be tested in cancer patients, though, the researchers will need to conduct more studies. However, if those go well, the one-two punch of an antibody and a drug could eventually be exactly what we need to knock out pancreatic tumors. 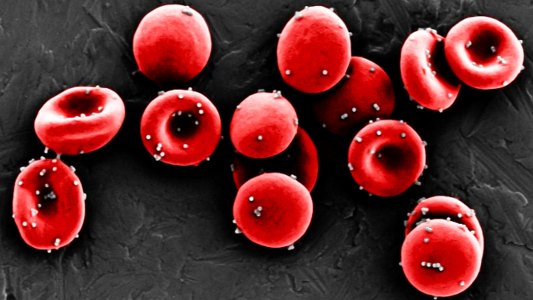 When cancer spreads, it often ends up in the lungs. ImmunoBait can ride a red blood cell in mice to deliver cancer immunotherapy where they live.