Cancer has a sinister propensity for spreading.

When it has metastasized to a new part of the body, it more often than not ends up in the lungs. According to Harvard, lung metastasis is the leading cause of death when cancers spread — its sensitive tissues are in danger of being damaged by common cancer treatment methods like chemotherapy.

Cancer immunotherapy — harnessing the body’s immune system to beat back the tumors — looks to be a promising alternative. Researchers at Harvard’s Wyss Institute have developed a way to get immune-piquing chemicals to the lungs — taking advantage of the very features that make the organ a common landing place for tumors.

“Our approach is the exact opposite of conventional cancer treatments that focus on getting the immune system to recognize and attack the primary tumor because those tumors are often large and difficult for immune cells to penetrate,” Wyss Institute postdoc, and co-first author on the study, Zongmin Zhao told the Harvard Gazette.

“We recognized that the high density of blood vessels in the lungs provides much better access to tumors there, offering a unique opportunity to induce an immune response by targeting the metastasis.”

Lung metastasis is common because of the organ’s physical structure. When blood works its way through the lungs, absorbing oxygen to be delivered to the rest of the body, it passes through minuscule branching blood vessels, which tumor cells can get lodged in.

Per Harvard, once they glom on, they make themselves at home, pouring out chemicals designed to suppress the immune system and hide themselves from cancer-killing T cells.

“Lung metastases deplete certain kinds of chemokines from their local environment, which means the signal that should attract beneficial white blood cells to fight the tumor is gone,” co-first author Anvay Ukidve said in the release.

The team theorized that if they could deliver those chemokines — think cellular distress signals — to just the right place, they could rally the immune system, delivering targeted cancer immunotherapy to the satellite tumors.

Their method, published in Nature Biomedical Engineering, is dubbed EASI.

Nanoparticles were designed to attach to red blood cells and only fall off during the tight squeeze through the lung’s tiny capillaries — ensuring they are dropped off just where we want them. This is one of the key benefits of cancer immunotherapy: a targeted attack that causes less collateral damage than carpet bombing tissues with radiation or chemotherapy.

To help make sure they stuck to lung cells, the nanoparticles were studded with antibodies that attach to a common protein found in the lungs.

Those nanoparticles are then loaded with a chemokine called CXCL-10, forming a drug they call ImmunoBait — bait to draw the immune system toward tumors lurking in the lungs.

Injected into mice with breast cancer that had metastasized to their lungs, EASI delivered the cancer immunotherapy to their little mouse lungs, clustering around the tumors.

The chemokine was cranked out at higher levels for up to 72 hours, even after EASI had faded, suggesting that EASI helped kickstart the body’s natural immune response.

Mice injected with the cancer immunotherapy lived twice as long.

To test for efficacy, the team surgically removed the main tumors of mice with breast cancer but left the metastatic tumors in the lungs. The mice then received injections of either the chemokine CXCL-10 alone, ImmunoBait (with its fancy nanoparticle) alone, or EASI (ImmunoBait latched on to a red blood cell).

Mice injected with the entire cancer immunotherapy delivery system had four- and six-fold greater tumor suppression than mice who just got CXCL-10 and ImmunoBait, respectively. They also lived longer, with roughly a quarter surviving for 40 days, compared to mice in all of the other groups, which died within 20.

Mice that were injected with tumor cells again after their EASI treatment had “significantly” lower tumor growth compared to the others, suggesting that the cancer immunotherapy response works similarly to how our immune system tackles, say, a virus — preparing the body to fight off a new attack.

There’s a major caveat here, of course, which is that, well, mice can lie. While they are scientific workhorses for a reason, a mouse is not a person, and there’s no guarantee EASI will work as well — or at all — in humans. 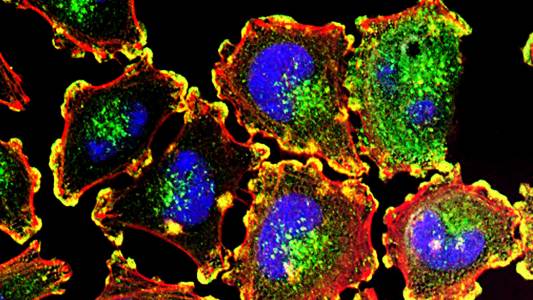 By adding two “boosters” to an in-development skin cancer vaccine, scientists may have improved its ability to prevent melanoma recurrence.