A three-year trial testing a patch for treating severe peanut allergies in children has found the therapy to be generally safe and well-tolerated, with rates of adverse effects decreasing over time.

Designed to test the peanut allergy patch under real-world conditions similar to how the researchers think it will be used, the study was presented at the American College of Allergy, Asthma, and Immunology annual meeting in New Orleans.

Peanut allergy problems: Roughly 2% of the Western world suffers from peanut allergies, according to a review in the journal Allergy.

The peanut allergy is a particularly nasty one, the researchers note; compared to other food allergies, people with peanut allergies are more likely to suffer from severe reactions and potentially fatal anaphylaxis episodes, where their immune system unleashes a flood of chemicals within seconds of exposure that can collapse the body and be deadly if left untreated. (If you’ve seen someone jam an epipen into a person’s leg, you know how fast, brutal, and terrifying anaphylaxis can be.)

Unfortunately, these delicious legumes are everywhere.

“Approximately 7%–14% of patients with [peanut allergy] experience accidental peanut exposure annually, and one-third to one-half may experience anaphylaxis, although fatalities are rare,” the researchers wrote.

In children especially, a peanut allergy can also lead to bullying and exclusion, adding a social cost to the medical.

The peanut allergy patch, developed by French biopharm firm DBV Technologies, is based on a relatively new technique that involves safely exposing people to their allergens through the skin, called epicutaneous immunotherapy (EPIT).

DBV’s platform is called Viaskin. The patch, which is currently under investigation and has not been cleared for use, contains dried allergens — in this case, a miniscule amount of peanut protein, which MedPage Today described as being equivalent to roughly one-thousandth of a peanut.

The rate of moderate and severe adverse effects dropped each year.

When applied to the skin, condensation forms between the allergen and the skin. This condensation makes the allergen soluble, and it gets absorbed through the intact top layer of skin, the epidermis. Once in the dermis, it sparks a milder immune reaction that can hopefully train your body to ward off an allergy attack.

Safety trial: Dubbed REALISE, DBV’s trial was designed to test the safety profile of the peanut allergy patch when worn similarly to how a patient would wear it if it was approved.

REALISE enrolled 393 children with peanut allergies, including 14 with a history of severe anaphylaxis. Those subjects were randomly broken into two groups for the first six months, one which received the peanut allergy patch and another the placebo.

After those six months, all of the subjects received the Viaskin peanut allergy patch, in what is known as an “open label” study. Then safety and tolerability information was collected for three years.

Almost all of the subjects had at least one adverse effect, with the effects being most common in the first year and tapering off over time. While 91% of participants had treatment-related adverse effects in year one, MedPage reported, the share experiencing moderate and severe effects dropped precipitously in year two, to 34.5% and 4.9%, respectively, and  to 23.9% and 0.9% in year three.

Adverse reactions considered to be mild, however, stayed fairly common, affecting a shade over 70% through year three.

The patch: Per MedPage, most of the adverse reactions involved the patch’s application site, Terri Brown-Whitehorn of Children’s Hospital of Philadelphia, a consultant to DBV, said during the presentation.

The patch is worn on a patient’s back, then moved periodically. Skin redness and itching at the application site were the lion’s share of adverse effects, and were considered mild to moderate.

There were more serious reactions, however, as 16 patients had 17 anaphylactic events considered caused by the peanut allergy patch over the three years. None of these reactions were considered severe, and, interestingly, the researchers did not find a difference in adverse effect reports in subjects with a history of severe anaphylaxis and those without.

“Over 36-months, Viaskin Peanut was generally well tolerated, with decreasing frequency and intensity of local and systemic treatment-related AEs over time,” the researchers wrote.

“No safety concerns arose in subjects with history of severe peanut anaphylaxis.”

A rocky path: Originally earning fast track and breakthrough status from the FDA, DBV’s patch suffered a setback last summer, when the FDA turned down its application.

The peanut allergy patch is still in multiple phase 3 trials to test how effective it is.

While the agency raised no safety concerns with the therapy, per se, it had issues with the design and manufacturing of the patch and its adhesive. Since then, layoffs have been announced, as the company cut back to focus on revising the peanut allergy patch.

While the safety trial’s results are encouraging, the patch is still in multiple phase 3 trials to test how effective it is at reducing allergic reactions. The company has submitted its to EU resubmit the 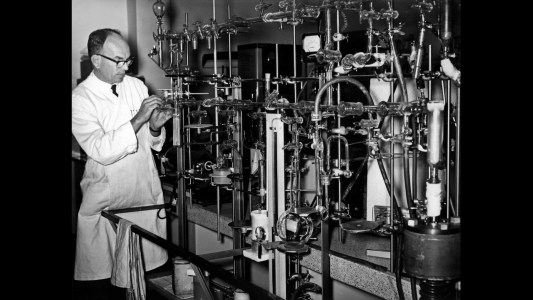 One of these scientists saved more lives than any other person in history.

Inventions
7 scientists we are thankful for this Thanksgiving
By Kevin Dickinson
Subscribe to Freethink for more great stories
Subscription Center
Sections
Video
Freethink
Subscribe
We focus on solutions: the smartest people, the biggest ideas, and the most ground breaking technology shaping our future.
Subscribe