Your skin (like all your organs) is covered with a flourishing ecosystem of bacteria, called the microbiome. These microbes play a vital but underappreciated role in regulating your health and immune system all over your body, and a new experiment suggests that altering skin microbiome could be the key to chronic eczema. The clinical results show that applying live, naturally occurring bacteria from healthy people’s skin can hugely reduce the severity of the disease, even after the treatments stop. If the healthy bacteria can be made to flourish on their own, it’s possible the treatment could even become self-sustaining.

Microbiome 101: Something like half of the cells in your body aren’t “yours”—they don’t contain your DNA, and they aren’t human. Some are nasty pathogens but the vast majority are friendly, symbiotic bacteria that have evolved to work with our cells to keep all of “us” healthy. Our natural gut microbes help us digest food and absorb nutrients, among other things; strong antibiotics sometimes cause diarrhea because they attack the good gut bacteria along with the infection. Microbiomes are also thought to help calibrate our immune systems to recognize the bad guys and avoid attacking innocent microbial bystanders or our own cells.

Eczema Is the Worst: Sometimes, this system gets out of whack. Either the right mix of bacteria is out of balance, or a bad strain of a bacteria takes over and crowds out the good ones. Doctors at the National Institutes of Health (NIH) think this could explain what’s going on with a common type of eczema called atopic dermatitis. This condition afflicts millions of adults and children in the United States, and the causes are diverse. Genes, allergies, and environmental irritants have all been implicated. But scientists noticed that people with the disease have an unusually large amount of Staphylococcus aureus on their skin, a common bacterium that causes infections and inflammation that makes skin red, swollen, and itchy. They theorized that an imbalanced microbiome could cause a surplus of bad bacteria and a shortage of the good bacteria that keep skin hydrated and healthy.

The Treatment: Mouse experiments suggested that increasing a naturally occurring skin bacteria called Roseomonas mucosa could alleviate the symptoms of the disease, like dryness, itching, rashes, and infections. The bacteria only helped if the R. mucosa strain was taken from healthy people’s microbiome, while the same bacteria from eczema sufferers actually made the condition worse. Now, human trials are showing that cultures of R. mucosa can significantly reduce the severity of the disease, just by spraying a solution of bacteria on the skin. The study was small (just ten adults and five children) but the effects were large. A majority of participants reported a better than 50% improvement in their condition. Several patients reported needing fewer steroids even after the trial ended, and there were no reported side effects.

How Does It Work? Skin tests on the children showed that the therapy seems to cut down the population of S. aureus on the treated skin, implying good bacteria might crowd out the bad. Scientists also found that the different strains of R. mucosa produced different chemicals that either irritated skin cells or helped them maintain a healthy barrier. Larger placebo-controlled trials are needed, but the hope is that by rebalancing the living ecosystem on the surface of the skin, doctors could permanently improve patients’ conditions, reducing the need for other expensive, ongoing treatments. 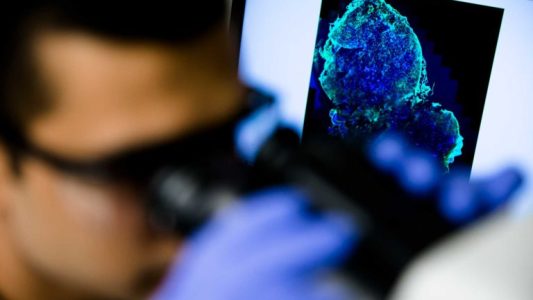 A new pill can make cancer cells glow under infrared light, and it could eliminate for mammograms.