For a lot of us, this is the first all (washed!) hands-on-deck challenge we’ve ever faced. Everyone needs to do their part to make sure COVID-19 does as little damage as it can. It’s a battle fought with soap and social distancing.

In times of war, industry can be mobilized as an effective weapon. There are companies and facilities capable of cranking out large numbers of things we need, and their contribution to this fight has begun.

French pharmacies have been stripped clean of sanitizer — and the fashion and luxury goods industry has taken a ballet-flat-wearing-step into the fray.

LVMH, the opulent conglomerate that owns Louis Vuitton, Dior, Moet & Chandon, and Fenty Beauty — along with a jewelry box of other famous brands — announced on March 15 that they are going to manufacture hand sanitizer to aid in the French fight against the virus.

Three of the brand’s perfume and cosmetics facilities will begin making hand sanitizer instead. The sanitizer will be given free to French authorities, with Parisian hospitals prioritized, WWD reports. Forbes reports that LVMH expects to manufacture 12 tons by the end of the week.

“Through this initiative, LVMH intends to help address the risk of a lack of product in France and enable a greater number of people to continue to take the right action to protect themselves from the spread of the virus,” LVMH said in a statement.

“LVMH will continue to honour this commitment for as long as necessary, in connection with the French health authorities.”

And on this side of the pond, American distilleries are now making hand sanitizer too. Last week Atlanta’s Old Fourth Distillery began producing and offering hand sanitizer for free, CBS News reports. But, just two days into giving it away, they ran out of the solution. While they plan to resume production this week when they get the next round of ingredients — this time, the company announced, they will be focusing their priority on fulfilling the needs of first responders and healthcare workers.

“We distill Conniption gins from a 95% ethanol base. Having this ethanol available enables us to develop a highly effective sanitizing solution…”

Other distilleries jumping in to help with the shortage include: Fellow Peach Staters Moonrise Distillery and Shine Distillery & Grill in Portland are making and donating sanitizer, with the latter saying it will share its recipe with other distillers.

Durham Distillery in North Carolina announced that instead of hand sanitizer, it would produce and give away a sanitizing solution for hospitality workers. The spray solution could be used on doorknobs, sink faucets, and glass-touch surfaces.

“Durham Distillery is in a unique position of providing assistance to our hospitality colleagues,” the company website says. “We distill Conniption gins from a 95% ethanol base. Having this ethanol available enables us to develop a highly effective sanitizing solution of ~70% ethanol and distilled water.”

The hospitality industry around the globe has been hit hard by COVID-19 as many establishments are closing in order to encourage social distancing.

Across the Atlantic, the BBC says the government will be asking private industry to help with a more complicated need. COVID-19’s deadliest symptom is pneumonia, inflammation of the lungs. This can make it difficult to breathe, and the hardest hit patients may need bedside ventilators to help. Patients often recover, NPR says, but there is still a major risk of a shortage, especially if communities fail to flatten the curve.

The UK’s answer is to ask anyone with the capability to do so to begin making ventilators.

“Preparing for the spread of the coronavirus outbreak is a national priority and we’re calling on the manufacturing industry and all those with relevant expertise who might be able to help to come together to help the country tackle this national crisis,” the UK government announced.

“We need to step up production of vital equipment such as ventilators so that we can all help the most vulnerable, and we need businesses to come to us and help in this national effort.”

It’s a daunting challenge. BBC business editor Simon Jack says that at least one company is concerned about the speed of flipping the lines. There is no one accepted ventilator design and it could take time to source parts. Engineers are apparently already at work creating ventilator designs that can be cranked out, and Downing Street plans to ask if ventilator makers are willing to share their intellectual property to help out.

The British hotel industry, lacking travelers, has also been tabbed as temporary hospitals if the need should arise.

Even Amazon is making drastic changes. The company announced to sellers that it would be prioritizing shipments to its warehouses that directly relate to the outbreak. Per CNBC, this includes home staples, medical and health products, groceries, baby products, and beauty and personal care.

An Amazon spokesperson told CNBC that “we are temporarily prioritizing household staples, medical supplies and other high-demand products coming into our fulfillment centers so we can more quickly receive, restock and ship these products to customers.”

Amazon expects the measures to last until April 5.

Times of crisis require extraordinary measures. As public health officials and people mobilize, some corridors of the private sector — the focus of this past fall’s Event 201 pandemic simulation — are attempting to do their part.

Engineering
Treating broken bones in war zones made easier with low-cost device
The device performs similarly to its commercial counterparts but costs one-tenth the price.
By Stephen Johnson
Up Next 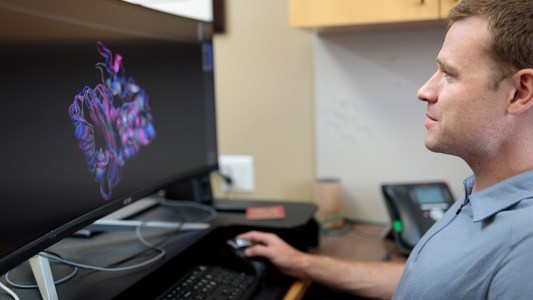 Help fight the coronavirus by donating your spare computing power to [email protected], which will use it to run valuable protein-folding simulations.

Coronavirus
Our spare computer is helping fight coronavirus. yours can, too.
By Kristin Houser
Subscribe to Freethink for more great stories
Subscription Center
Sections
Video
Freethink
Subscribe
We focus on solutions: the smartest people, the biggest ideas, and the most ground breaking technology shaping our future.
Subscribe