A new technique combining surgery and artificial intelligence is giving people with limb amputations the ability to control a prosthetic hand with their minds, precisely and in real-time.

The technique is the work of researchers at the University of Michigan, who recently published a paper in the journal Science Translational Medicine detailing their success using it to treat people with hand or lower arm amputations.

People have been replacing their missing body parts with prostheses for millenia, but traditionally, many of the devices have been largely cosmetic, with limited functionality.

That started to change in the 1940s when German physics student Reinhold Reiter developed the first myoelectric prosthesis, a device that could translate electric signals from peripheral nerves in the residual limb of a person with an amputation into commands for their prosthesis.

“We’re not going to stop working on this until we can completely restore able-bodied hand movements.”

If a person with a myoelectric prosthetic hand contracts their bicep, for example, the device might translate the signal produced by their nerves into a command to make a fist.

Today, most myoelectric prostheses use electrodes placed on the skin of the residual limb to pick up the nerve signals, but that approach can yield weak signals that limit the functionality of the prosthetic limb.

Researchers have tried other techniques to maximize the signal from peripheral nerves, but according to the UM team, each has disadvantages, ranging from the production of scar tissue around nerve endings to the need for invasive surgery.

The UM team’s technique can reportedly improve signal strength while avoiding the pitfalls of existing approaches.

For their study, the UM researchers started by surgically transplanting a section of healthy muscle onto the endings of several nerves in the patients’ residual limbs.

Over the course of three months, the nerve endings latched onto the muscle grafts, which the researchers dubbed Regenerative Peripheral Nerve Interfaces (RPNIs).

Two of the study participants then agreed to let the researchers implant electrodes directly into the RPNIs. When they then thought about moving their prosthetic hand in a certain way, the electrodes picked up the signals.

“To my knowledge, we’ve seen the largest voltage recorded from a nerve compared to all previous results,” researcher Cindy Chestek said in a news release. “In previous approaches, you might get 5 microvolts or 50 microvolts — very, very small signals. We’ve seen the first ever millivolt (1,000 microvolt) signals.”

“So now we can access the signals associated with individual thumb movement, multidegree of freedom thumb movement, individual fingers,” she continued. “This opens up a whole new world for people who are upper limb prosthesis users.”

Capturing the signals was just the first step, though.

Next, the UM team fed the signals through a custom-built machine learning program that translated them into precise movements for the participant’s prosthetic hand.

“This worked the very first time we tried it,” Chestek said. “There’s no learning for the participants. All of the learning happens in our algorithms. That’s different from other approaches.”

“It’s like you have a hand again. It brings you back to a sense of normalcy.”

During testing, participants were able to move each of the fingers on the prosthetic hand individually, pick up blocks, and even play the game “Rock, Paper, Pliers” (the prosthetic hand can’t form the traditional scissors motion, so the team had to improvise).

“It’s like you have a hand again,” study participant Joe Hamilton said in the news release. “You can pretty much do anything you can do with a real hand with that hand. It brings you back to a sense of normalcy.”

The team is now looking for additional trial participants and is hopeful their technique will one day be available outside the lab.

“It’s going to be a ways from here, but we’re not going to stop working on this until we can completely restore able-bodied hand movements,” Chestek said. “That’s the dream of neuroprosthetics.” 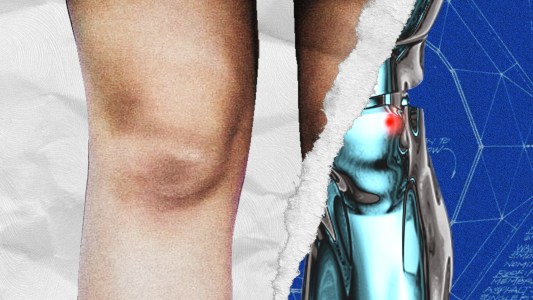 We’ve come a long way since the first prosthetic leg, and “smart” limbs, equipped with computing capabilities and…