Protists — a slippery category of creatures, predominantly microscopic, single-celled, and capable of causing disease, most notoriously malaria — may be performing a gustatory feat unique on Earth: eating viruses.

Despite viruses’ unrivaled ubiquity, scientists have not found any creatures that can consume them as food. Viruses are tiny, simple, and not clearly even alive, in the usual sense. But new research out of Maine’s Bigelow Laboratory for Ocean Sciences has found evidence that protists may have viruses on the menu, the New York Times’ Katherine J. Wu reports.

Eaters of the Dread?

The evidence for our first virovores — to borrow a term from Wu — comes from a host of ocean-dwelling organisms.

The study, published in Frontiers of Microbiology, sounds painstaking: after grabbing samples from the Gulf of Maine and the Mediterranean and sussing out roughly 1,700 protists, the researchers split individual cells to analyze what’s inside.

“We get to catch them in the act of whatever they’re doing,” microbiologist and study first author Julia Brown told Wu.

And what they found were pieces of viral genetic material.

The cell-splitting technique is very sensitive, and can reveal any genetic material within the protists, per Newswise. These other genes could come from symbiotic partners, bacteria and other protists devoured, or even microbes and viruses that just plain got stuck to the protists.

For some of the protists sampled, explanations other than eating the virus made sense. In many, the viral material found belonged to viruses that attack bacteria — meaning we may have an Old Lady Who Swallowed a Fly situation: the virus invaded a bacteria and then both got swallowed by a protist.

But in every sample of two specific protists, choanozoans and picozoans from the Gulf of Maine, viral DNA was found. These mysterious miniature beasts are poorly understood, Newswise reports, and their main food source is something of a mystery because their “feeding apparatus” is too small for bacteria.

All of the choanozoans and picozoans had genetic material from viruses — including bacteriophages, which prey on bacteria — but without any bacterial DNA, meaning this may not be a Matryoshka doll of protists chowing down on virus-riddled bacteria.

The authors don’t think these viruses are attacking the protists directly, either.

“It is very unlikely that these viruses are capable of infecting all the protists in which they were found,” Brown told Newswise.

Don’t Print the Menus Yet

Although the analysis can reveal what genetic material is present in the protists, it cannot show why. And there’s plenty of possibilities.

“The protists may be in a highly grazing mode much of the time,” Florida A&M microbial ecologist Henry N. Williams told the Times’ Wu.

But if the hypothesis does bear out, it could turn our understanding of viruses in marine ecosystems on its head.

Current dogma is that the viruses act as a “‘viral shunt,’ where viral infection funnels a substantial fraction of the microbial primary and secondary production back to the pool of dissolved organic matter,” the authors write.

In other words: they kill stuff and plow it back into the proverbial ocean soil.

But if virovores exist, the virus may be balancing life on both ends, as not only the great check on life, but also an abundant food source for it, as well. 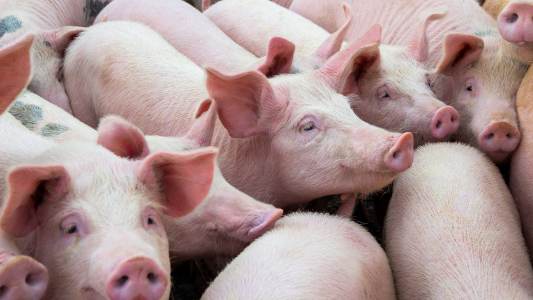 A pilot program in North Carolina offers one solution to scanning for a potential pig virus in our farm system – slurry testing.

Virology
Studying pig sh*t to prevent the next pandemic
By B. David Zarley
Subscribe to Freethink for more great stories
Subscription Center
Sections
Video
Freethink
Subscribe
We focus on solutions: the smartest people, the biggest ideas, and the most ground breaking technology shaping our future.
Subscribe