Accidentally hitting your head as you get up in the morning or falling off your bike without a helmet may seem like an innocuous injury, but head injuries like these may be doing more damage than you think. While protected from the outside world by our skulls, our brains are still an incredibly sensitive and complex piece of biological machinery that can cause serious problems if damaged.

The danger of head injuries has become increasingly important for both professional and high school-level sports in recent years as studies have shown that repeated head injuries may cause neurological damage.

Identifying these injuries early and getting patients the treatment they need (which can range from limiting screen time for minor concussions or administering anti-seizure medication for moderate to severe TBI) is essential to prevent further negative impacts. However, existing tests can take up to six hours to return a result. In a study published in September, a team of researchers has identified a new way to test for these injuries that could take just 15 minutes and could save $100 million on CT scans annually.

Not all brain injuries are created equal and hitting your head on an open cabinet door may not have the same effect as a blow to the head from a linebacker. But generally a serious blow, jolt, or penetrating head injury is referred to as a traumatic brain injury (TBI.) In the United States, there are an estimated 1.7 to 3.8 million traumatic brain injuries each year, according to the CDC, 10% of which are caused by sports and recreational activities.

TBIs can cause headaches, loss of balance, hypersensitivity to light or sound, and even slurred speech. Extreme cases may result in a loss of consciousness.

While these injuries can be painful and dangerous, their severity is not always easy to determine immediately after the event. That’s what makes a rapid blood test so useful.

How a Brain Injury Gets in Your Blood

Over the past 20 years,  scientists have identified two key biomarkers in patients’ blood that are tell-tale signs of TBI. The first, which has been the European standard for years, is a protein called S100B. The second, which is approved by the U.S. FDA for testing, is something called a glial fibrillary acidic protein (GFAP). Past research has shown that both of these proteins are released from the brain and make their way into the bloodstream in response to an injury — including TBI.

But S100B has also been found outside the central nervous system as well, raising questions for scientists about how good it actually is at specifically diagnosing TBI and not accidentally identifying another injury instead.

With this in mind, the team decided to develop a quick biomarker test that focused on detecting GFAP in the blood instead.

A Lot of Blood Tests

Over the course of four years the team tested their idea by analyzing blood samples from 1,497 patients who had sought treatment for head injuries at one of eighteen TBI specializing trauma centers in the U.S. While they were primarily interested in what role GFAP could play in this test, the team also simultaneously analyzed the samples for S100B.

After four years of analyzing blood samples, the researchers could report that GFAP as a biomarker significantly outperformed its rival, S100B, as a predictor of TBI. They also found that when analyzed within 24 hours of the initial injury, a point-of-care test for GFAP was an excellent predictor of TBI and could deliver results in less than 15 minutes. The researchers estimate that using a test like this, instead of relying on expensive CT scans, could save up to $100 million annually.

The study’s lead researcher and director of the Neurotrauma Clinical Trials Center at the University of Pittsburgh Medical Center, David Okonkwo, says in a statement that he’s particularly excited for the ways this test could improve care in rural hospitals.

“Knowing this protein can show the severity of a TBI through a simple blood test is promising when considering we can use a device that already is in widespread use in hospitals, doctors’ offices and urgent care facilities,” said Okonkwo. “All we would need to do is add an extra cartridge to the device to analyze blood for the GFAP protein.” 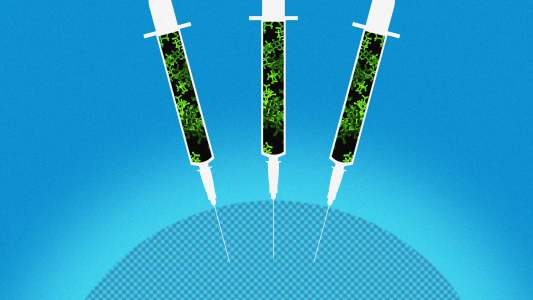 Adjuvants create a better vaccine immune response, but they also cause inflammation. A peptide may help curb their side effects while improving protection.

Public Health
A new molecule may take the edge off vaccines — and make them perform better
Subscribe to Freethink for more great stories
Subscription Center
Challenges
Video
Freethink
Subscribe
We focus on solutions: the smartest people, the biggest ideas, and the most ground breaking technology shaping our future.
Subscribe