Researchers have discovered a molecule that may reduce the adverse effects associated with adjuvants — a crucial ingredient in some vaccines.

The research, published by a team at the University of Chicago in Science Advances, found that a peptide can prevent the initial inflammation adjuvants can cause — and, in a surprise discovery, may actually make a vaccine more effective.

Inflame in the Membrane

Adjuvants are added to vaccines to make them more effective by instigating a stronger immune response.

But, according to the CDC, some adjuvants occasionally cause side effects — both local (redness, swelling, or pain at the stick site) and systemic (fever, chills, aches) — which could potentially be why your friend insists the flu vaccine actually gave them the flu.

Here’s the sore-arm-rub, though: those responses are generally considered a good thing. Inflammation is a sign of the immune system reacting, which is exactly what we want a vaccine to do.

Older vaccines that use weakened or inactivated pathogens (like the oral polio vaccine, the BCG vaccine against tuberculosis, and the MMR vaccine) cause robust immune response, because the presence of the pathogen itself works like a built-in adjuvant.

But many new vaccines aren’t made that way anymore. Now, many vaccines include only pieces of the virus or bacteria, which are good enough for the immune system to recognize the threat. These often don’t inspire as robust immunity, however, so adjuvants get added in to give the vaccine a little extra kick.

Scientists think that extra immune boost may be the key to creating vaccines for some of our toughest tiny enemies, including HIV.

It is maddeningly difficult to create an HIV vaccine. The virus comes in a wide variety of subtypes; it mutates with exceptional speed, shaking off pursuing antibodies; and even weakened or killed HIV is feared to be able to replicate inside cells. While a few people are naturally immune to it, nobody who isn’t has ever acquired immunity to it by beating the infection, so scientists don’t even know precisely what acquired immunity would look like. And that’s not even all the issues.

However, there is an adjuvant, called a toll-like receptor (TLR) agonist, which looks like it has potential against HIV. One catch, though: it can also induce an excessive inflammatory response.

“In the vaccine field, you hear over and over again that you just have to accept the response that comes with an individual molecule,” lead researcher Aaron Esser-Kahn said in the University of Chicago’s article about the discovery.

But Esser-Kahn’s team didn’t want to just accept it; they wanted to find a way to keep human cells from producing too many cytokines — the chemical signals that cause inflammation.

The researchers found that a peptide called SN50 can disrupt the pathways in the cells that cause this initial inflammatory response. They added it to a variety of TLR agonists, and found that not only did it reduce inflammation from the adjuvant, it actually boosted the amount of antibodies made by the vaccine — an unexpected benefit.

“We thought that the molecule would decrease inflammation, but we were surprised to see that it could provide more protection at the same time,” Esser-Kahn said.

The researchers tested their peptide-armed vaccines in mice. In mice who received a dengue fever vaccine, SN50 helped the vaccine produce more antibodies against the virus. Challenged against HIV, it produced antibodies that targeted a difficult spot on the virus, which mutates less than the easy-to-reach parts — potentially jumping one of the many hurdles in an HIV vaccine’s way. And when they put it in a flu vaccine, they found it increased protection against influenza as well.

Next on the docket will be looking for a smaller molecule that can do the same thing, and seeing what role it may play in treating diseases like cancer and COVID-19.

But it’s important to keep in mind that mice lie; what works in a mouse doesn’t necessarily work in a human.

Still, the prospect of an ingredient that can reduce the worst side effects of adjuvants — and open the door for new ones — while boosting the vaccine’s capabilities is an exciting one.

“The approach has a lot of implications for how we might design vaccines over the next five or ten years,” Esser-Kahn said. 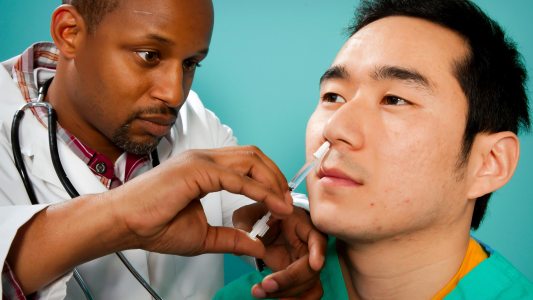