Rhode Island will become the first state to open a safe consumption site — also known as a safe injection site — where people can use drugs in hygienic facilities under supervision of staff.

The move will position Little Rhody on the forefront of a massive problem: are harm reduction policies our best shot at reducing drug addiction and overdose deaths?

For Rhode Island State Rep. Edith Ajello (D), those deaths are not mere statistics; her best friend’s son died of an overdose during the pandemic, a tragedy which pushed her to support opening the sites.

Little Rhody will be on the forefront of a massive question: are harm reduction policies our best shot at reducing drug addiction and overdose deaths?

“Safe consumption sites can help to cut these losses,” she told the Wall Street Journal.

A rising tide: The CDC chart looks like a sea monster rising to the surface — a noticeable and menacing uptick, beginning around the start of the pandemic, in drug overdose deaths.

At the end of this March, 96,779 drug overdose deaths had been reported; the agency adds, in bright red, a sad caveat: “underreported due to incomplete data.”

According to the Journal, those deaths represent a 30% increase in 2020, possibly due in part to the pandemic’s foundation-shaking impact. For proponents of harm reduction, the best way to combat overdose deaths and drug addiction is not by criminalization, but by offering help and safer places for addicts to use.

Harm reduction: According to the National Harm Reduction Coalition, harm reduction strategies are designed to make drug use safer, not stamp it out, and steer people towards addiction treatment rather than the criminal system.

Safe consumption sites are a big part of this harm reduction strategy. These buildings are equipped with clean needles and equipment for people to use. After they take the drugs, the person is often observed for a period of time by medical staff who can help prevent and/or reverse overdoses using drugs like Narcan.

Harm reduction, with its focus on making drug use safer — abstinence, in this position, is just not realistic — and providing users safety and support, stands in stark contrast to the US’s current modus operandi, which is to criminalize drug use.

“We’ve been historically a country that addresses a health condition with punishments,” Suzanne Carlberg-Racich, an associate professor of public health at Chicago’s DePaul University, told the Journal.

Opponents of harm reduction strategies believe that making drug use safer could simply increase drug use.

“We prefer a push to resolve dependency rather than facilitate it.”

Swiss researchers found that the safe consumption sites reduced overdose deaths and public drug use. In Canada, where the drug sites are under strict scientific review, researchers have found the sites reduce HIV risk behavior, steered users towards addiction treatment, reduced overdose deaths, and have provided a safe space for women who use drugs.

“There isn’t an increase in crime in the neighborhood where the site is located. There has not been a single death from anyone having an overdose at the site,” Peter Davidson, of the UC San Diego Department of Medicine, told the LA Times.

“It generally seems to be good for public health and social order outcomes, in the same way that it does elsewhere in the world.”

The Ocean State’s test case: Harm reduction advocates will be watching Rhode Island closely. The two year pilot program will be the first run by a state, and states like California and Rhody’s neighbor Massachusetts may not be far behind.

Rhode Island may also serve as a case study for a more existential issues: how does harm reduction hold up against the US’s institutionalized criminalization of drug use?

The two year pilot program will be the first run by a state, and California and Massachusetts may not be far behind.

Previous attempts have run up against the government’s established policies.In Philadelphia, where Narcan-toting librarians train themselves to prevent overdose deaths, the city’s plans to open a safe consumption site called Safehouse were scuttled by a federal court order. (That fight is being taken to the Supreme Court.)

Rhode Island’s safe consumption sites may succeed where Philadelphia’s failed because states generally have more power to set drug policy than cities do, the Journal reported.

“People will put up a lot of roadblocks,” Amy Nunn, executive director of the Rhode Island Public Health Institute, a non-profit supporting a safe consumption site in Providence, told the Journal. “There’s just so much stigma associated with using drugs.”

We’d love to hear from you! If you have a comment about this article or if you have a tip for a future Freethink story, please email us at [email protected]nk.com. 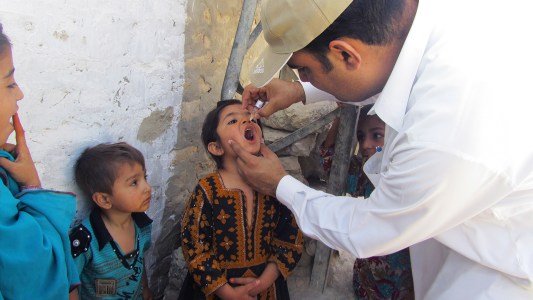 Oral vaccines are crucial to public health, but work worse where they are needed most. A new mouse study has a potential reason why.

Public Health
A new clue in why oral vaccines don’t work as well in developing countries
By B. David Zarley
Subscribe to Freethink for more great stories
Subscription Center
Sections
Video
Freethink
Subscribe
We focus on solutions: the smartest people, the biggest ideas, and the most ground breaking technology shaping our future.
Subscribe