Despite what Eli Lilly’s commercial may say, not all medicine works in the bodies of rich and poor people “just as well.”

It is one of the cruelties of public health that vaccines — including crucial, cheap, and easy to administer oral vaccines — do not work as well in developing countries as they do in wealthy ones.

Researchers have been trying to unravel this “immune inequality,” and a team at the University of Pittsburgh believes they may have a possible answer. Using mouse models, they found that a gut disorder called “environmental enteric disruption” (EED) may hinder the body’s immune response.

“EED can affect anyone, but it’s a major problem in children because they’re still developing,” Timothy Hand, assistant professor of pediatrics and immunology, said.

It is one of the cruelties of public health that vaccines — including crucial oral vaccines — don’t work as well in developing countries as they do in wealthy ones.

EED is associated with inflammation in the small intestine, and may be caused by poor sanitation, malnutrition, and infections.

Children with EED can be stunted, Hand said. They may be shorter, or have less cognitive ability — chronic issues which cannot be reversed later. And EED may be putting them at further risk of contracting other diseases by blunting the impact of oral vaccines.

“It is tragic that the exact vaccines that might help prevent EED don’t work in children who have the disease,” he said.

Oral vaccines, like the kinds used against polio and rotavirus, are especially important in developing countries because they are easy to give out. There’s no needle training necessary; a couple drops on the tongue, and bam, the immune system gets goosed.

Those vaccines are also better at stimulating an immune response in the gut, which is crucial in places where poor sanitation makes food and water a disease vector.

The same pathogens that can contaminate food and water can also contribute to EED. A combination of malnutrition and infection by bacteria, funguses, and viruses can cause chronic inflammation and damage tiny, finger-like projections in the gut that absorb nutrients, the researchers said — each problem compounds the next.

“If we could get flush toilets and plumbing to the world, we wouldn’t have this disease,” Hand said. “What’s causing these chronic infections is that people are either drinking contaminated water or flies are transporting diseases from sewage to food.”

In their study, published in the journal Immunity, the researchers used mouse models of EED. The mice were fed a poor diet lacking in proteins and fats, and infected with a strain of the common bacteria E. coli that sets up shop in the gut.

“If we could get flush toilets and plumbing to the world, we wouldn’t have this disease.”

When given an oral vaccine, the mice had a “severely compromised” immune response. The EED mice had 18 times less special immune cells called T cells compared to control mice without EED.

The researchers also found that the mice’s microbiome — the entire ecosystem of microorganisms inside their gut — impacted their immune response. When gut bacteria in the EED mice were wiped out by antibiotics, oral vaccine effectiveness recovered.

This suggests that pairing vaccines with antibiotics could help boost vaccine efficacy — but besides increasing the cost, that may increase other risks, such as antibiotic resistance. As always, more research is needed. 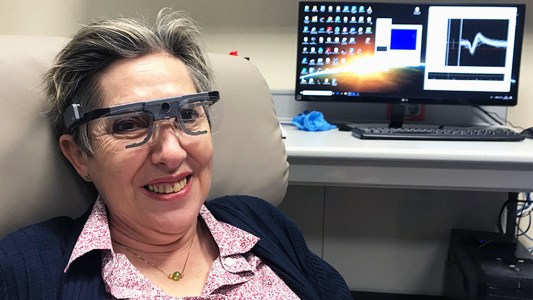 A former science teacher who had been blind for 16 years received a brain implant that allowed her to see shapes again.