Can a system for charting the stars be used to treat cancer? (And no, I don’t mean astrology.) Researchers at Johns Hopkins think so. Using a sky-mapping algorithm developed by astronomers, the scientists have found a way to predict whether cancer will respond to immunotherapy.

“This platform has the potential to transform how oncologists will deliver cancer immunotherapy,” Drew Pardoll, M.D., Ph.D., director of the Bloomberg-Kimmel Institute for Cancer Immunotherapy, said in a Johns Hopkins’ release.

Predicting the future is life or death: Immunotherapy harnesses the body’s own immune system to attack cancerous tumor cells. But tumors have a multitude of nasty tricks to evade our immune system.

Immunotherapy needs to get around these tumor defenses, allowing our own powerful weapons to fight back.

An immunotherapy treatment for melanoma can block a protein called PD-1, helping the immune system spot and destroy cancer cells. But only some melanoma patients will respond well to anti-PD-1 drugs, and time is of the essence with an aggressive cancer like melanoma.

“The ability to predict response or resistance is critical to choosing the best treatments for each patient’s cancer,” the researchers state.

Lighting the way: To build their prediction model, the researchers took melanoma biopsies — about 127,400 mosaic images, comprising a million cells — and used immunofluorescence to highlight proteins in the tissue.

Immunofluorescence works via antibodies that glom on to certain proteins and glow, revealing their targets.

Using their tags, the researchers were able to illuminate the tumor’s microenvironment by examining the immune cells in and around the melanoma. From there, they located six biomarkers that, taken together, were “highly predictive” of a cancer’s response to anti-PD-1 therapy.

“The data outputs were linked to patient outcomes, informing in a clinically relevant way how cancer evades the immune system,” the team wrote in their Science paper.

The fault in melanoma’s stars: The key to this cancer-prediction algorithm was imaging techniques originally developed for astronomy.

Using a sky-mapping algorithm developed by astronomers, the scientists have found a way to predict whether cancer will respond to immunotherapy.

The image analysis tools were created for the Sloan Digital Sky Survey, a map of the universe spearheaded by Alexander Szalay, professor of physics, astronomy, and computer science.

“The sky survey ‘stitched’ together millions of telescopic images of billions of celestial objects, each expressing distinct signatures — just like the different fluorescent tags on the antibodies used to stain the tumor biopsies,” Johns Hopkins explains.

The algorithm, called AstroPath, is already being applied to lung cancer, and the team hopes it will lead to therapeutic guidance for other cancers as well. 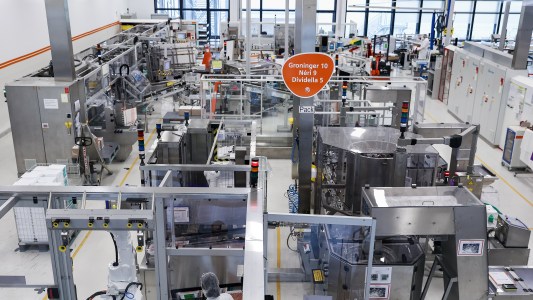 Pharma leviathan GlaxoSmithKline is rolling out digital twins to help create “the vaccine factory of the future.”