Scientists have little trouble coaxing stem cells to grow into mature human cells in the lab, but growing large enough quantities of the cells to be useful has proven to be a major barrier to advancing stem cell research.

Scientists can grow the cells in petri dishes, but these lab-made cells often behave differently than ones that grow in a living body, which makes them less useful for research.

One solution is to implant human stem cells in animal embryos, like lab mice, and then let the developing animal grow the human cells inside it. But this process has proven to be frustratingly difficult and unreliable.

Now, scientists have found a way to grow millions of mature human cells in a mouse embryo, an advance that could lead to new stem cell treatments for countless diseases — and maybe even replacement organs for humans.

Every cell in your body started out as a stem cell in your embryo, which eventually evolved into all of the 200 or so types of specialized cells that make up your organs and control all of your biological functions.

All stem cells have an ability called “pluripotency,” which means they can grow into many different types of cells, like muscle, bone, or brain cells.

This could lead to new stem cell treatments for countless diseases — and maybe even replacement organs for humans.

However, pluripotency exists on a spectrum, with “naïve” stem cells at one end and “primed” at the other. Primed stem cells have already headed down a path toward becoming specific kinds of cells, so they have fewer options for what they can grow into. Naïve stem cells are much less developed and can therefore grow into any kind of human cell or tissue.

Researchers could inject stem cells harvested from human embryos into mouse embryos and then wait for the embryo to grow.

“When the primed human cells are put into the mouse blastocyst (a three-day old embryo), they fail to develop,” researcher Jian Feng said in a news release. “We wanted to see if it was possible for the human primed cells to go back to the naïve state, just like the pluripotent stem cells inside a mouse blastocyst.”

Through their stem cell research, the scientists found that inhibiting a specific enzyme (mTOR) in the primed human stem cells for three hours did the trick, triggering “a series of events that rewire gene expression and cellular metabolism so that the primed cells become naïve,” Feng said.

Once they had their naïve human stem cells, the scientists then injected 10 to 12 of them into multiple mouse blastocysts. By the time the experiment ended, 17 days later, millions of mature human cells were growing in the mouse embryos.

Up to 4% of all the cells in the embryos were human, and the scientists found the human cells throughout the embryos — they were in the developing livers, hearts, and retinas, as well as the red blood cells.

They published their study in the journal Science Advances on May 13.

Prior to this study, efforts to grow mature human cells in mouse embryos yielded only small amounts of immature cells.

Now that these scientists have shown that it’s possible to grow large numbers of mature human cells in animal models, the next step is looking at all the ways future stem cell research can make use of this ability.

Eventually, researchers might even use the new method to grow enough human cells or tissues to support transplantation into humans. One day, the scientists wrote in their study, we might even be able to grow entire human organs in animals. 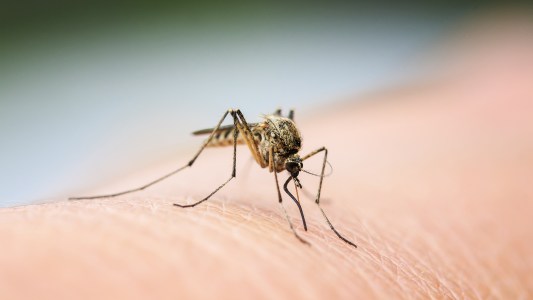 Scientists have discovered a microbe in the guts of mosquitoes that appears to prevent the most common malaria parasite from infecting the insects.