Researchers have discovered a new way to diagnose and track Parkinson’s disease progression — even before the first symptoms of Parkinson’s appear.

Currently, doctors diagnose Parkinson’s disease after symptoms occur. By that time, there could be significant damage to neurons in some areas of the brain. Earlier diagnosis means people living with Parkinson’s disease could have a better quality of life and save on costly treatments.

There are a wide range of neurodegenerative diseases that are difficult or impossible to diagnose before symptoms occur. This study could also provide new ways for researchers to screen for molecules that could lead to early diagnosis of other diseases like Parkinson’s.

Symptoms of Parkinson’s Are a Limited  Diagnostic Tool

Currently, there are no specific tests for diagnosing Parkinson’s disease. Neurologists look for common symptoms of Parkinson’s, like tremors or changes in speech, and they may use blood tests or genetic tests to rule out other conditions that cause similar symptoms. But the diagnosis of Parkinson’s disease always occurs after the patient already has symptoms.

200,000 people are diagnosed with Parkinson’s in the U.S. each year. Doctors have been looking for new ways to recognize the condition earlier by looking for biological molecules present before symptoms of Parkinson’s become visible. For example, clumps of alpha-synuclein protein commonly form in the brain before outward signs of the disease appear. But there isn’t a reliable way to recognize and track them.

Positron emission tomography (PET) is an imaging technique to help doctors see inside the body. It uses radioactive molecules as tracers for imaging different tissues. For years, a University of Pennsylvania team worked to find a tracer that would light up alpha-synuclein, the hallmark protein of Parkinson’s. If they could find a selective tracer to identify the protein, doctors could use it to diagnose the disease with a PET scan, possibly before the patient experiences the debilitating symptoms of Parkinson’s.

Now, in a study published in Chemical Science, researchers describe a new way to identify these molecules.

How to Find a Needle in a Haystack

When researchers described and published the alpha-synuclein structure, the team was finally able to experimentally confirm where tracer molecules could bind to the protein. Using a computation method, they screened millions of candidate molecules to see which ones could attach to the protein. They compared their hypothetical molecules’ results to commercially available molecules to find ones with a similar structure to narrow their list down.

They started the process with 7 million potential compounds, narrowed it down to 20 promising candidates that they could test in the lab, and ultimately found two that had a high binding rate to alpha-synuclein.

This proof-of-concept for the process will allow them to quickly design and discover molecules for other neurodegenerative disorders, too.

“This can be something that takes 10 to 15 years in industry, and we’re trying to do it in about five,” says chemist E. James Petersson, lead author on the study.

“I really see this as being a game-changer on how we do PET probe development,” says researcher Robert Mach. “The significance is that we’re able to screen millions of compounds within a very short period of time, and we’re able to identify large numbers of compounds that will likely bind with high affinity to alpha-synuclein.” 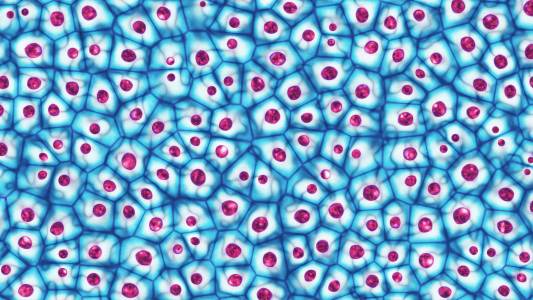 Researchers are creating an interactive, 3D map of the human body to help identify and prevent disease.

Medicine
“Google Maps for the human body” offers a deep view inside our trillions of cells
By Sarah Wells
Subscribe to Freethink for more great stories
Subscription Center
Sections
Video
Freethink
Subscribe
We focus on solutions: the smartest people, the biggest ideas, and the most ground breaking technology shaping our future.
Subscribe