Researchers at Rice University and the University of Colorado School of Medicine have designed and tested modified E. coli bacteria that can detect signs of inflammatory bowel diseases (IBD) in mice.

They believe it’s more than just a new way to diagnose gut problems — it’s also a big step for synthetic biology, bringing engineered life from the lab to the clinic.

What is IBD? Episodes of inflammatory bowel diseases, like ulcerative colitis and Crohn’s, are often accompanied by high acidity in the intestines, a condition called acidosis.

“Normally, the pH in your intestines is around seven, which is neutral, but you get a lot of inflammation in Crohn’s disease, and pH goes to something like three, which is very acidic,” Jeffrey Tabor, associate professor of bioengineering and biosciences at Rice and study co-author, said in a statement.

It’s this acidic environment that the glowing bacteria respond to, changing their glowing colors to warn of an IBD flareup. It’s a new practical application for synthetic biology.

What is synthetic biology? Simply put, synthetic biology is the science of redesigning living organisms for specific tasks. Organisms can be modified to clean up pollutants (a process known as bioremediation) or create rubber and fuel, among a myriad of other potential uses.

Using synthetic biology to create bacterial sensors for disease takes advantage of millions of years worth of evolution, Rice says. Over that time, the bacteria have developed an array of “specific and sensitive” genetic circuits that they use to sense their surroundings; synthetic biology uses those sensors for our own ends.

For example, researchers at MIT have developed a “bacteria on a chip” test that uses E. coli to sense gastric ulcers, which would usually require an endoscope to definitively diagnose — and sedation.

“The goal with this sensor is that you would be able to circumvent an unnecessary procedure by just ingesting the capsule, and within a relatively short period of time you would know whether or not there was a bleeding event,” MIT lead author Mark Mimee said.

“The gut harbors trillions of microorganisms that play key roles in health and disease,” Tabor told New Atlas in 2017. “However, it is a dark and relatively inaccessible place, and few technologies have been developed to study these processes in detail.”

His current collaborator, Colorado immunology professor Sean Colgan, points out, specifically, “It turns out that measuring pH within the intestine through noninvasive ways is quite difficult.”

But those tens of thousands of genetic sensors in bacteria can do the job just fine.

Rice Ph.D. student Kathryn Brink had discovered the pH-sensing circuits in 2019, while demonstrating a synthetic biology “plug-and-play” toolkit. Colgan read about the sensor, and wondered if the bacteria could be used to detect Crohn’s disease in a mouse model.

Brink whipped up some of the acidosis-reacting E. coli, arming them with a gene that causes the bacteria to glow different colors in acidic environments, going from red to green.

Colgan’s lab studies the genes that are turned off and on during acidosis, and wanted to use the bacteria as a way to see if what they saw in the lab would happen in animals as well.

When introduced to a mouse model for Crohn’s, the E. coli did exactly what synthetic biology designed them to do, their glow shifting from red to green.

“Colonizing this bacterial strain was the perfect biological tool to monitor acidosis during active inflammation,” Colgan said. The bacteria serves as a “useful and valuable set of biomarkers” to tell if there was active intestinal inflammation.

A colored bowl: While the technique, published in PNAS, has yet to be tested in humans, the mouse genes that flip off and on during acidosis that Colgan is studying have been observed in humans suffering Crohn’s flareups, too.

Tabor expects human clinical trials to begin within the next several years, and imagines a near-future where synthetic biology produces a colorful bowl that may reveal real-time information about your bowels.

“We think it could be added to food and programmed to turn toilet water blue to warn patients when a flareup is just beginning,” he said. 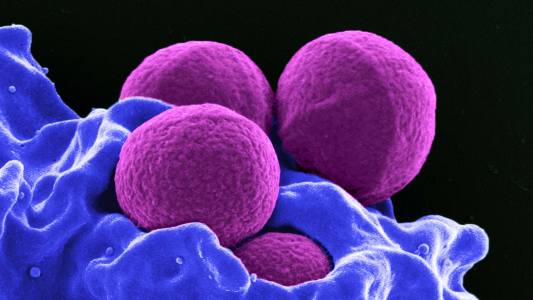 Israeli researchers have developed a set of “molecular tweezers” that can pick apart the biofilm which protects some bacteria.