When most people think of the word “virus,” they often relate it to infections or diseases. The sole purpose of a virus is to attack and infect a normal cell, use it to replicate, and then kill it. Some examples include the flu virus and the deadly Ebola virus.

In recent times, however, our understanding of viruses has evolved drastically. New studies are revealing the nuances of various viral infections, and others are trying to figure out how to harness the killer functions of viruses and use them for therapeutic purposes, like cancer treatment. Until now, scientists have lamented that the only cure for the childhood eye cancer retinoblastoma is surgical removal of the affected eye. Now, in a recent report published in Science Translational Medicine, scientists have found another approach to target retinoblastoma using safer: cancer-killing viruses.

This study caught my attention because I am an ophthalmology and visual sciences researcher and have been working on understanding the causes of inherited eye diseases and how to design effective treatments. In my lab we are exploring using modified viruses as vehicles to deliver the correct form of a gene into the diseased cells of the eye. The newly published study describes, what I believe is a game-changing approach: use of a modified virus to directly kill cancer cells. The strategy harnesses the natural cell-killing ability of a virus to treat eye cancer.

Retinoblastoma is a common type of childhood cancer and a leading cause of blindness in children. Although drug delivery and chemotherapy can provide some benefit, the side effects can lead to vision loss in the long-term and eventual removal of the eye. New therapeutic strategies are therefore being considered for this devastating disease.

Using the knowledge of how retinoblastoma cells multiply to become cancerous, a team of researchers led by Ángel Montero Carcaboso of the Sant Joan de Déu Research Institute in Barcelona, Spain, genetically modified a virus called adenovirus that recognizes and kills the retinoblastoma cells without harming the neighboring healthier cells.

A major concern with using viruses for therapy is their ability to stray from the infected area. To make sure that the virus couldn’t harm healthy cells, it was specifically engineered to reproduce only in the retinoblastoma cells. Carcaboso’s team tested the distribution of the adenovirus in other parts of the body after the modified virus had been injected into the eye of retinoblastoma mice. They did the same thing in young rabbits without tumors. His team discovered that the virus was confined to the tumor cells of the eye and showed only slight and short-term leakage into the bloodstream. The immune system of the mice then seemed to clear the leaked virus from the system within six weeks. The authors inferred that the modified adenovirus was safe enough to proceed further.

Safety and efficacy of the modified adenoviruses

The researchers then analyzed the ability of the modified adenovirus to kill the retinoblastoma tumor cells when the virus was injected into the eyes of the retinoblastoma mice. The researchers reported that the injection of these viruses increased the survival of the eye by about 40 days as compared to the uninjected eye. Another positive finding was that the virus did not attack normal, healthy cells outside the tumor.

Encouraged by the success of the modified viruses in mouse eyes, the authors tested their cancer-killing ability in a small clinical trial in two patients. These patients had not responded to chemotherapy or radiotherapy, and the only remaining option was the removal of the eye to prevent the tumor from spreading throughout the body.

In the preliminary studies, the researchers found that the modified adenovirus targeted the tumor cells in the patients’ eyes. Unfortunately, one patient’s eye had to be surgically removed as it became cloudy and couldn’t be examined by the researchers. When Carcaboso’s team studied the tumor of the excised eye, they found that the virus was reproducing only in sick cells and not in the healthier part of the eye. In the second patient, there seemed to be a reduction in the size of the tumor and the number of sick cells.

Similar cancer-killing viruses have been previously described to treat melanoma, a deadly type of skin cancer. In this case, the modified virus was injected into the melanoma, which killed only the infected cells. In fact, this led to the first drug using a cancer-killing virus to be approved by the Food and Drug Administration.

The researchers in my laboratory study how viruses function when they have been modified not to kill the cells, but instead deliver the correct cargo to them. One such application is the delivery of the correct form of a gene that is defective in a patient with a genetic disorder. One of the problems with using these safer modified viruses to deliver genes is that they have a limit on the size of the gene – about 4,000 units of DNA – that they can carry into a cell. We work on tackling the problem of delivering genes that exceed this limit and cause severe blindness diseases like retinitis pigmentosa and Leber’s congenital amaurosis.

We recently discovered a strategy to make shorter forms of these genes that fit into the viruses. Recent preclinical studies in my laboratory have shown in mice that when our viruses deliver the correct version of a gene, which is mutated or missing in the light-sensing cells of the eye, we can delay the onset of blindness.

Carcaboso’s retinoblastoma research harnesses a different property of viruses. I see cargo delivery and cell-killing abilities of viruses as two sides of the same coin. Modified viruses can deliver therapeutic drugs or genes without killing the cell. The cancer-killing viruses, however, are modified to enter and kill specific cells.

I find Carcaboso’s studies interesting and exciting, but they are still at a preliminary stage. Researchers need to do more work to understand how a patient’s immune system responds to the injected adenovirus. After all, our immune system is designed to seek out and destroy viruses before they cause harm. The size of the retinoblastoma tumor could also be a limiting factor in the favorable outcome of the injection. The ongoing clinical trials will provide more information about the safety and the healing ability of the cancer-slaying talents of these microscopic pathogens.

Hemant Khanna is an Associate Professor of Ophthalmology at the University of Massachusetts Medical School. This article was first published on The Conversation.

Medicine
Scientists uncover key to future hepatitis C vaccine
While treatments are available for HCV-related infections, they are expensive, hard to access, and do not protect against reinfection.
By Alba Torrents de la Peña and Lisa Eshun-Wilson

Virology
How flu got milder since 1918 pandemic
The risk of death from influenza has declined over time, but globally, hundreds of thousands of people still die from the disease each year.
By Saloni Dattani and Fiona Spooner | Our World in Data
Up Next 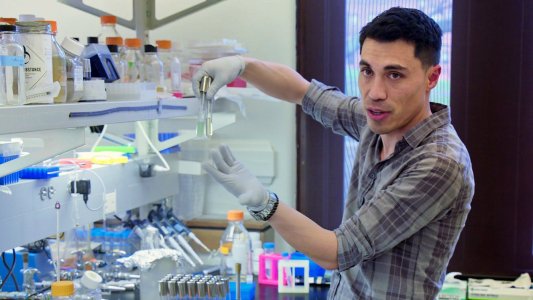 Drugs couldn’t stop her infection — so she asked Ben Chan to get her a virus, instead.

Virology
Paige and the virus hunter
By Kaitlin Ugolik
Subscribe to Freethink for more great stories
Subscription Center
Sections
Video
Freethink
Subscribe
We focus on solutions: the smartest people, the biggest ideas, and the most ground breaking technology shaping our future.
Subscribe