Since 2016, Verily — the somewhat-embattled health arm of Google parent company Alphabet — has been working on fighting what may be the deadliest animal on Earth: the mosquito.

Verily’s technique involves raising mosquitoes in specialized, automated facilities, infecting them with the bacteria Wolbachia, and releasing swarms of males (which do not bite) to mate with wild females. The resulting eggs never hatch, and the population falls off a cliff.

The company now believes it may be able to clear dengue virus from Singapore, which has found itself wracked by cases, thanks to an invasive mosquito species that is spreading worldwide.

Buzzing bad news: Mosquitoes are flying syringes that kill hundreds of thousands of people per year — most of them children — with an array of diseases, including malaria (the leading killer), yellow fever, and dengue fever.

While public health efforts have helped to lower malaria rates, dengue cases — caused by a virus carried by a different species of mosquito — have gone in the opposite direction. Global cases have “grown dramatically,” the WHO says, increasing eight-fold over the past two decades, while the mosquitoes’ expanding range now puts roughly half the world’s population at risk.

The WHO estimates there are around 390 million cases of dengue per year, over 80% of which are “mild” (although still quite miserable). But severe dengue cases, numbering in the tens of millions, are “a leading cause of serious illness and death in some Asian and Latin American countries.” And they’re growing.

Bloodsuckers in Singapore: Among the countries at risk is Singapore.

The wealthy city-state, located on the southern end of the Malay Peninsula in Southeast Asia, has seen an explosion in cases. According to Singapore’s National Environment Agency (NEA), cases in 2022, as of December, were six times higher than 2021.

To blame: the invasive, human-hunting Aedes aegypti mosquito, which is spreading globally.

Verily’s Debug Project is taking aim at the pest, using sterile insect techniques to reduce the population of these disease-carrying mosquitoes.

Singapore has seen an explosion of dengue cases, with 2022 numbers being six times higher than 2021.

“While there are thousands of different species of mosquito, Aedes aegypti is the primary vector of dengue, Zika, chikungunya and yellow fever, and there aren’t good ways to control this mosquito,” Verily wrote in a 2016 blog post announcing the Debug Project.

In 2018, Verily partnered with Singapore’s NEA on “Project Wolbachia” to use bacteria to sterilize, and eventually collapse, the Aedes population. After trial runs, the company now believes the technique could even eradicate dengue from the city-state.

“We could make Singapore the first dengue-free country in the tropics,” Debug Project lead Linus Upson told the Financial Times. “We are making sure our [island-wide] proposal is scientifically and economically sound . . . and will make a proposal to [the Singapore government] in the next couple of months.”

Teaming up with bacteria: Using Wolbachia bacteria as mosquito control is a “complex but potentially exciting approach,” Davidson H. Hamer, a professor of global health and medicine at Boston University and interim director of the Center for Emerging Infectious Diseases Research and Policy, tells Freethink.

Wolbachia is an indiscriminate infector of insects, infecting roughly 60% of all types of insects around the world, according to the CDC, and, fortunately, can’t make humans or animals sick.

In 2008, scientists discovered that Wolbachia infection actually protected fruit flies against certain viruses; from there, it was on, with researchers discovering the bacteria could short-circuit a number of viruses, including Zika, yellow fever, and dengue, carried by mosquitoes.

There are two main approaches to using Wolbachia for disease control. One method, developed by the World Mosquito Project (WMP), introduces Wolbachia-infected mosquitoes into a region. As the bacteria spreads across the region, the infected mosquitoes become protected from viruses as Wolbachia out-competes them inside their body.

“We effectively immunise them,” Cameron Simmons, director of global implementation at the World Mosquito Program’s and Monash University’s Institute of Vector-Borne Diseases in Australia, told the Financial Times.

WMP’s large study in the Indonesian city of Yogyakarta is the best study of the technique so far, and it “resulted in a significant reduction in patients with virologically-confirmed dengue fever,” Hamer says. “While this was super exciting, there are many questions. Will this work in an even more densely populated urban area like Singapore?”

Verily and the NEA have taken a different tack in the use of the bacterium. In their program, mosquitoes are raised in automated facilities and sorted by sex, Financial Times reported, with swarms of non-biting, Wolbachia-infected males being released into the city.

When these males mate with Wolbachia-free females, the resulting eggs laid never hatch due to “biological incompatibility” between the infected males and uninfected wild mosquitoes, the NEA said.

A dengue-free city-state: While testing so far finds the Verily approach working, it is more expensive than the WMP’s method, which does not require large, specialized facilities.

“High-income countries such as Singapore or states in the US can afford the male mosquito method used by Verily,” Simmons told the Financial Times. “But in cities such as Jakarta, Bangkok or Ho Chi Minh, both the mosquito and human population are much higher, making it more difficult and expensive.”

Proponents of Verily’s approach say that even the costlier method passes a cost-benefit test, because it’s cheaper than the impact of dengue fever, the Financial Times reported. The NEA estimated that the virus has cost the country’s economy over a billion dollars between 2010 and 2020.

Verily’s Upson told the Financial Times that there may be an environmental impact to tampering with the mosquito population, but argues that the invasive Aedes aegypti — originally native to Africa — is a bigger problem.  Those environmental impacts, as well as economic and logistical ones, will all need to be better worked out.

BU’s Hamer is “cautiously enthusiastic” about using Wolbachia as a dengue control strategy generally, but notes that “we need a lot more evidence, ideally from well controlled and implemented studies like Prof. Simmons’ [WMP] study in Indonesia.” 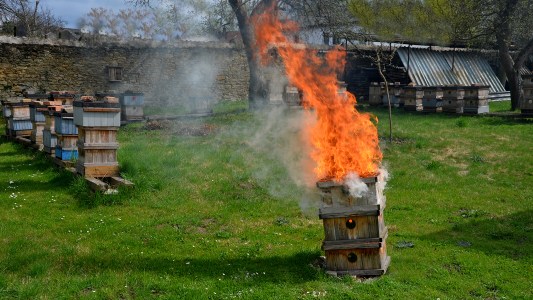 The USDA has conditionally approved a honey bee vaccine to protect the important insects from American foulbrood, a brutal bacterial infection.

Animals
The first ever honey bee vaccine has arrived
By B. David Zarley
Subscribe to Freethink for more great stories
Subscription Center
Sections
Video
Freethink
Subscribe
We focus on solutions: the smartest people, the biggest ideas, and the most ground breaking technology shaping our future.
Subscribe