One in five Americans now uses some sort of wearable fitness tracker to keep tabs on their health, from Apple Watches and Fitbits to smart rings. But despite their popularity, most of these devices can only interpret a small fraction of our “biodata,” the measurable signals our bodies produce.

Now, an international team of researchers has found a way to harness a previously untapped biological signal — one that can reflect everything from our mood to the effectiveness of our workouts: skin conductance.

More specifically, they’ve developed an app, “Affective Health,” that works with a wrist-worn wearable sensor to track how much you sweat — and in the process, they think they’ve discovered a better approach to designing health-tracking tech.

A New Kind of Wearable

Translating data from some health wearables is easy — a person might set a goal to hit so many steps a day, for example, or aim to keep their resting heart rate below a certain threshold.

It’s not so obvious how someone would want to use a wearable that measures their sweat levels, though.

“Making sense of these kinds of biodata is not easy,” researcher Pedro Sanches from KTH Royal Institute of Technology Stockholm said in a press release. “People are unfamiliar with this kind of information and it is not clear how people would want to use it, or interact with devices that present this biodata.”

In an attempt to identify a potential use for their app, which works in conjunction with a Philips DTI-2 wristband sensor, the researchers asked 23 volunteers to use the prototype system for one month.

They told each person that their skin conductivity would increase with increased sweating, and the app would display different colors to reflect this increase.

However, they left it to the volunteers to decide how they wanted to use the information gleaned from the wearable system.

After a month, they found that volunteers had taken three different approaches.

Some looked at the data as a way to track their emotions and mood. One participant, for example, noted that they associated being in a good mood with the colors green and yellow.

Other volunteers used the wearable system to help manage their stress levels, and still others used it to help them understand the impact of their athletic training and recovery exercises.

According to the researchers, this approach to wearable development could help ensure that future devices — ones measuring previously untapped biodata — provide people with the insights they actually want and not just insights developers think they’ll want.

“Our results suggest the value of a two-step approach for designing new technologies that present bio-data that are unfamiliar to users,” said researcher Kristina Höök.

“A deliberately open initial design stage allows users to develop their own ideas of how these kinds of products could be used,” she continued. “This is followed by a second step that tailors the functions of the device for specific activities, such as wellbeing, health, or productivity.” 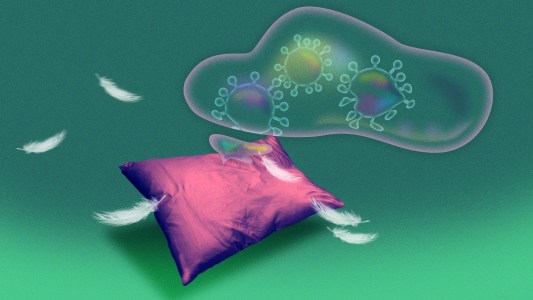 If you’ve been having strange dreams and poor sleep during lockdown, you’re not alone. The anxiety-inducing pandemic, less activity, and more screen-time have many more people struggling with insomnia than usual.

Coronavirus
The science behind your crazy pandemic dreams
4:40
By Doug Dais
Subscribe to Freethink for more great stories
Subscription Center
Sections
Video
Freethink
Subscribe
We focus on solutions: the smartest people, the biggest ideas, and the most ground breaking technology shaping our future.
Subscribe