A massive ring-shaped machine in France is now generating x-ray beams 10 trillion times brighter than those doctors use to image broken bones.

Researchers have already used this powerful device, dubbed the Extremely Brilliant Source (EBS), to study the inner workings of the novel coronavirus — and in the future, it could give scientists an unprecedented look at everything from human organs to ancient artifacts.

X-rays are a form of electromagnetic radiation, just like sunlight, but they have an energy level that lets them pass through substances that reflect ordinary light. This is what makes them so useful for medical imaging.

If a doctor wants to get a look at a patient’s broken finger, for example, they can position the hand in front of something that detects x-rays (usually a kind of film) and then point the rays at it.

The x-rays will pass easily through the less dense parts of the hand (the flesh) but have a harder time passing through the denser parts (the bones) — similar to how you might make a shadow puppet appear on a wall.

The EBS is a type of device called a synchrotron. It produces x-ray beams far brighter than those created by the standard medical x-ray device, which allows for far more detailed images.

To create these x-rays, the EBS accelerates electrons to near light speed. At that point, the particles emit the incredibly bright x-ray beams, which can then be captured by a detector and used to produce incredibly detailed images of the interiors of objects.

A synchrotron revealed the interiors of dinosaur eggs and a crocodile mummy.

If a doctor used these x-rays to image a person’s hand, they wouldn’t just be able to see the bones — they’d be able to see each atom in the patient’s blood cells. They’d also kill the patient, as the level of radiation in the x-rays would be fatal.

Still, that doesn’t mean the EBS’s ultra-bright x-rays won’t be a boon for healthcare — researchers are already using them to study both the coronavirus itself and lung tissue damaged by it.

Researchers used the x-ray beams produced by the EBS’s predecessor to get an inside peak at everything from a 2,000-year-old mummified crocodile to a fossilized dinosaur egg, so there’s no telling what insights could be ahead of us now that the new synchrotron is operational. 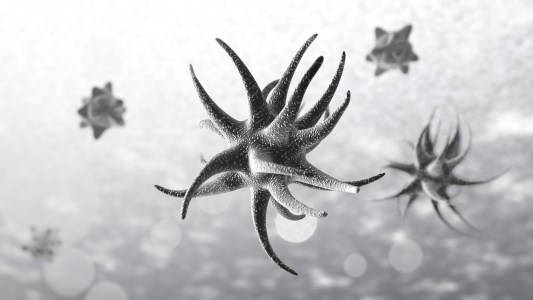 Despite their abundance, nothing we know of eats viruses. But new research suggests microbes called protists might.

Virology
Are microbes called protists our only virus eaters?
By B. David Zarley
Subscribe to Freethink for more great stories
Subscription Center
Sections
Video
Freethink
Subscribe
We focus on solutions: the smartest people, the biggest ideas, and the most ground breaking technology shaping our future.
Subscribe