A study involving tiny fish could lead to big developments in the hunt for new human infertility treatments.

By genetically modifying zebrafish, researchers have discovered a link between two genetic mutations and sexual dysfunction. They also discovered a new sex hormone that could restore sexual function to fish with the mutations — and, potentially, humans with the same mutations.

Using genetic engineering tech, researchers can reproduce gene mutations in zebrafish that they think might play a role in human diseases. They can then study the fish to see whether they show similar symptoms of the disease or respond to potential treatments for it.

This is the first evidence that these genetic mutations disrupt sexual behavior.

For a new study, set for publication in the journal PNAS, a team from the University of Ottawa mutated the genes that control the production of a protein (secretogranin-2) that plays a key role in hormones related to reproduction and growth in humans.

These mutations have already been discovered in humans, and the researchers found that zebrafish with them  were terrible breeders — only 10% of the male/female pairs with the mutation effectively spawned.

“This is the first evidence that mutation of these genes leads to disruption of sexual behavior in any animal,” researcher Vance Trudeau said in a press release.

That was just one of the researchers’ big discoveries, though. They also learned that one particular fragment of the protein — the secretoneurin peptide — is important for stimulating the zebrafish to spawn.

“In the genetically altered fish, we can partially restore sexual function by a single injection of the secretoneurin peptide into the body,” Trudeau said. “We believe the peptide acts on cells in the brain and pituitary gland to increase hormone release thereby enhancing the ability of the female to ovulate and lay her eggs.”

This appears to confirm the hypothesis that secretoneurin is a sex hormone. And now that researchers know injections of it can serve as an infertility treatment in zebrafish with mutated genes, they can start to explore whether the same is true in humans.

“The secretoneurin produced in fish is remarkably similar to that found in other animals, including humans,” Trudeau said.

“We can now use our genetically modified fish to look for other factors that could enhance sexual function,” he continued, “be it for increased spawning in cultured fish species, or to help with the search for new human infertility treatments.” 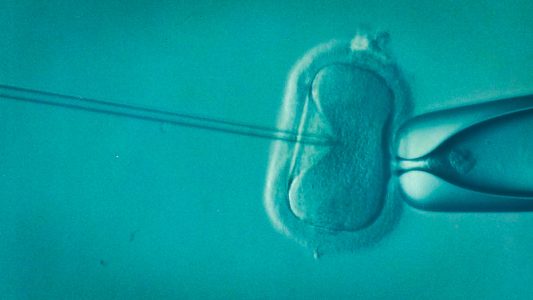 A French cancer survivor is the first person to give birth via a fertility treatment that involves freezing and thawing eggs that underwent in vitro maturation.